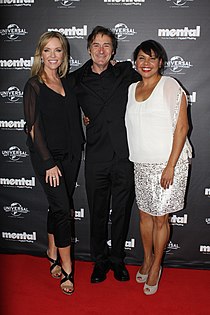 Rebecca Gibney (l), director PJ Hogan (m) and Deborah Mailman (r) at the premiere of the film Mental in Sydney in September 2012

PJ Hogan (* thirtieth November 1962 in Brisbane , Queensland as Paul John Hogan ) is an award winning Australian film director and screenwriter , who some well-known movies staged, including Muriel's Wedding , The Wedding of my best friend , Peter Pan or Shopaholic - Confessions of a Shopaholic .

Paul John Hogan was born in Brisbane in the Australian state of Queensland in 1962. He grew up in the small town of Tweed Heads on the north coast of New South Wales and competed after visiting the Tweed River High School as a 17-year-old at the Australian Film, Television and Radio School in Sydney , where he besides the director Jane Campion also met his future wife Jocelyn.

Hogan began his career in 1984 as a director and screenwriter with the short film Getting Wet . He made his cinema debut two years later with the feature film The Humpty Dumpty Man . From the late 1980s to the early 1990s, PJ Hogan was mainly active in television, where he wrote and directed for series such as The Bartons , The Flying Doctors , The Miraculous Mellops and Lift Off .

With the romantic comedy Muriel's wedding with Toni Collette in the lead role, he landed a major international film hit in 1994. Australian production has won numerous national and international awards. Among other things, with the Australian Film Institute Award for Best Film, as well as prizes in six other AFI categories, and the film has also received nominations for the Golden Globe Award , the British Academy Film Award and the Writers Guild of America . In 1997 he directed another commercially very successful romantic comedy with the American production My Best Friend's Wedding with Julia Roberts , Dermot Mulroney and Cameron Diaz . The composer of the film James Newton Howard was nominated for an Oscar in 1998 in the category Best Music, Original Musical or Comedy Score . In addition, the film comedy received numerous other nominations and awards.

In the 2000s, he wrote and directed various cinema productions and television films such as Who Killed Victor Fox? , Peter Pan , Dark Shadows or the comedy Shopaholic - The bargain hunter with the cast Isla Fisher , Hugh Dancy and Krysten Ritter . In 2012 he shot another comedy with Mental with the actress Toni Collette in the lead role.

PJ Hogan has been married to the Australian director, film producer and screenwriter Jocelyn Moorhouse , who also supported him as a producer on various film projects , since the 1980s. They both have a daughter, Spike (* 1988).