Paul Herre studied modern and recent history in Berlin, Jena and Leipzig. From 1906 to 1912 he was a private lecturer at the University of Leipzig and then an associate professor until 1920.

Herre edited the 7th volume of Ullstein's world history and wrote the chapter on the general development of the state system. Together with Otto Buek , Herre tried to publish the journal Die Geisteswissenschaften . In contrast to the journal Die Naturwissenschaften, which was published by Arnold Berliner (1862–1942) in the same year and still appears today, it had to be discontinued in 1914.

From 1920 he was a councilor in the Foreign Office and from 1921 director of the Reich Archives. In 1941 he published Germany and the European Order, edited by Georg Leibbrandt and Egmont Zechlin, an homage to Adolf Hitler and the National Socialist idea of ​​the national community. After the war, his writings were the South Tyrolean question ( Beck , Munich 1927) bears the ethnocentric-German national trains, and Germany and the European order ( German publishing house , Berlin 1941) in the Soviet occupation zone to the list of auszusondernden literature set.

In his book Kronprinz Wilhelm , published in 1954, Herre distanced himself from his own ideological past by opening the damnatio memoriae of Friedrich Wilhelm von Prussia , who died in 1951 . Like Fritz Fischer and other well-known historians of the Weimar Republic and the Third Reich, Paul Herre suddenly changed his mind after the end of the war. 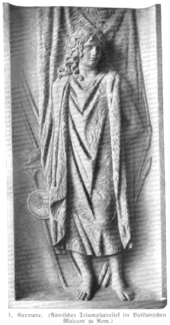 "Germane". Roman triumphal relief in the Vatican Museum in Rome. Illustration from German culture of the Middle Ages in pictures and words by Dr. Paul Herre. Quelle & Meyer publisher in Leipzig 1912.