The pilot tone multiplex method, pilot tone method, FM stereophony or simply FM stereo is understood to be the analog transmission method for stereophonic signals for transmission via frequency-modulated transmitters , such as those used in the FM band ( radio ). The procedure is specified in the ITU recommendation BS.450 ( English Transmission standards for FM sound broadcasting at VHF ). The stereo sound transmission in analog terrestrial television with two-channel sound and AM stereo differs from the method explained here for VHF radio.

Spectrum of a German FM stereo transmitter with RDS; The multiplex signal can be seen roughly in the left half and the RDS signal on the right in the middle

One of the main requirements for the FM stereo system is full compatibility with mono technology : Mono devices should be able to reproduce an adequate mono signal even with stereo broadcasts; Even when receiving mono broadcasts, stereo devices should output the mono signal evenly on their two output channels. That is why the most obvious option of simply using a separate carrier (i.e. its own transmitter) for each audio channel is ruled out.

Instead, the will pilot tone - division multiplexing (FM MPX) is used. The baseband signal (in addition to frequency ranges for other services such as radio data system (RDS)) consists of three parts, hereinafter referred to as the multiplex signal :

This multiplex signal as the sum of the three parts is transmitted directly by means of frequency modulation in the VHF band. 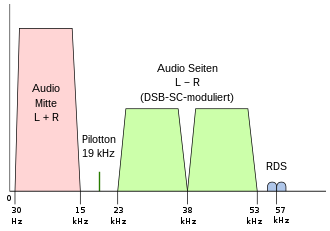 The 19 kHz pilot tone, i.e. half the frequency of the suppressed 38 kHz carrier, enables the receiver to restore the 38 kHz carrier with phase accuracy, but requires a maximum of 10% of the total modulation range of the VHF transmitter and thus much less than would be required for direct transmission of the carrier at 38 kHz. (See the figure with the spectrum shown schematically; note the spectral distance between the 19 kHz pilot tone and other useful signals and compare with the distance that a 38 kHz signal would have.) This method increases the cost of coding and Decoding, but improves the signal-to-noise ratio of the LF signal. A stereo station received in monaural thus achieves almost the same signal quality as a pure mono station with the same strength. 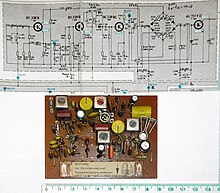 The assembly in the stereo receiver that provides the stereo signal from the demodulated multiplex signal as a left and right channel is called a stereo decoder. The stereo decoder doubles the frequency of the pilot tone and regenerates the carrier. With the help of this, he obtains the side signal from the multiplex signal. For good stereo separation, the lowest possible phase error between the pilot tone and the 38 kHz carrier in the decoder must be maintained.

The further signal processing in the stereo decoder takes place in the same way as the decoding of MS stereophony : With the help of summing circuits, the signals for the left and right channels are formed after the center signal (L + R) and the side signal (L - R) have been obtained:

The stereo decoder must remove the pilot tone from the two LF channels, as this is just below the audible limit. Furthermore, depending on the reception quality, he must switch the stereo decoding on or off in order to avoid excessive noise in the stereo signals in poor reception conditions. Finally, most stereo decoders have the option of showing the radio listener that the stereo is active with a signal lamp.

Function of the stereo decoder

The stereo decoding is nowadays (as of 2009) achieved by means of coherent demodulation of the side signal and, depending on the channel, an addition or subtraction of the center signal and the side signal. Since the phase position of the regenerated carrier must be stable and exact, a phase-locked loop (PLL) is used which halves the local carrier frequency generated with a VCO and constantly adjusts the frequency and phase position to the pilot tone. The demodulation then takes place, for example, with a ring mixer that generates the side signal (L - R) from the carrier and side bands. This must then be added to the center signal (L + R) with the correct level and a different sign in each case in order to obtain the two stereo channels with little crosstalk .

Another method uses switching demodulators: the decoder generates a 38 kHz switching signal from the regenerated carrier, which sends the multiplex signal (without the pilot tone) via analog switches to two separate low-pass filters with a 15 kHz cut-off frequency via analog switches at the rate of the regenerated carrier frequency. The left and right audio channels are then obtained directly at the output of the two low-pass filters. To remove the pilot tone, the multiplex signal is first passed through a 19 kHz notch filter . These switch stereo decoders manage without addition or subtraction stages and mixer stages to obtain the side signal in its baseband position and without capacitors and inductors and can therefore be implemented entirely as an integrated circuit (IC). The method can also be implemented on a digital level and thus enables fully digital signal processing using signal processors .

A mono receiver simply reproduces the multiplex signal. The side signal is inaudible due to its high frequency in the bandpass position (from 23 kHz), and most people do not even hear the pilot tone because of the frequency near the hearing threshold and its low sound pressure level . Only the middle signal (already in the baseband position) is perceived as a mono signal.

Introduction of the standard

In Germany, the Reichs-Rundfunk-Gesellschaft (RRG) had already dealt with the production of stereo broadcasts on a trial basis. In continuation of this tradition, the broadcaster Free Berlin took up this issue again in the mid-1950s and began broadcasting experimental stereo programs on December 26, 1958. In the first attempts, the modulations intended for the two loudspeakers of the radio listener were transmitted via two separate VHF transmitters and received with two normal receivers. The experiments met with great interest among Berlin listeners. However, it was clear from the start that there was ultimately only one method in question in which a single VHF channel is used, the carrier frequency of which is double modulated.

There have been a number of proposals by American and European experts for this double modulation. Towards the end of the 1950s, efforts were increased to create uniform standards for the broadcasting of stereophonic programs in Europe. The Technical Commission of the European Broadcasting Union (EBU) set up a working group which, with the participation of experts from broadcasting, postal administrations and industrial companies from a number of European countries, studied the technical issues of broadcasting stereophony theoretically and experimentally and examined the various proposed methods for their suitability checked. There were two main issues involved: firstly, avoiding crosstalk, that is, the mutual influencing of the two modulation channels, which must be kept as low as possible, and secondly, mono compatibility. In the Federal Republic of Germany, the investigations required to solve these problems were carried out by the Institute for Broadcasting Technology (IRT) in cooperation with the broadcasting corporations , the Federal Post Office and industry.

The best method to date has proven to be the pilot tone multiplex method developed by the US companies General Electric and Zenith Electronics Corporation and described above in this article, which was finally recommended as a standard by the EBU in 1962 and introduced in most countries in Western Europe. The ARD broadcast its first stereo programs from 1963. 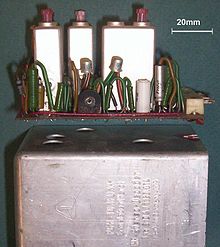 In West Germany , fully transistorized stereo decoders were already used in high-quality FM receivers from around 1964 and older devices that were intended for this purpose could be retrofitted. In the GDR , the first fully transistorized stereo decoder for radio receivers was produced in 1965 by PGH Tonfunk Ermsleben ( Harz ). It was developed in cooperation with the VEB Central Laboratory for Radio and Television Reception Technology (ZRF) Dresden and manufactured until 1969.

More modern stereo decoders synthesize the 38 kHz carrier with a PLL control loop (PLL decoder), which significantly reduces low-frequency noise. Here, too, the demodulated difference signal is added to the sum signal without inversion or with inversion in one matrix circuit per channel. Integrated stereo decoders do not require any coils and have been developed in special integrated circuits (e.g. types LM1310 ( National ), MC1310 ( Motorola ), SN76114 ( TI ), TDA7040 ( Philips , 1986), TCA4500 (Motorola, 1976) and A290 ( RFT )). Only a few external resistors and capacitors are required.