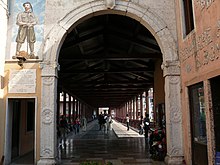 The bridge seen from the banks of the Brenta

Memorial plaques at the bridgehead; the lower one recalls the reconstruction by Bartolomeo Ferracina in the 18th century

The Ponte Vecchio , also called Ponte di Bassano or Ponte degli Alpini , over the Brenta in Bassano del Grappa is a wooden bridge from the Renaissance that was built in 1569 according to plans by Andrea Palladio and has been rebuilt based on this model after destruction. There were already a number of bridges at the site, which were destroyed several times. Because the bridge not only connected the settlements on both banks of the river, but also crossed the strategically important trade route to Vicenza , the bridges have been damaged or destroyed several times over the centuries not only by the Brenta, but also by human hands.

Today's Ponte Vecchio in Bassano del Grappa is a yoke bridge with five openings and a roof over the roadway. The whole construction is made of wood . The slender yokes, which barely reduce the flow cross-section of the Brenta and have strong struts in the direction of flow, are striking. The building is painted in red.

The first evidence of a bridge in Bassano comes from the years 1124 and 1209. Between the 13th and 14th centuries it was the subject of several disputes with Vicenza. The bridge was renovated in 1450 and 1499. In 1511 the bridge was set on fire by French troops under Jacques de La Palice retreating from the wars related to the League of Cambrai . The reconstruction only took place in 1522 in a way that the bridge had to be rebuilt as early as 1524 - this time in stone. This bridge had to be replaced by a wooden bridge as early as 1531, which fell victim to the floods in October 1567.

Palladio therefore presented a second design for a wooden bridge in the summer of 1569, which was based heavily on the previous construction, but had been heavily revised technically and structurally and had a visually appealing appearance. The construction seemed to have succeeded, because it lasted for two hundred years and only collapsed as a result of a flood on August 19, 1748. Nevertheless, Palladio's drawings served as the basis for all bridges built later at this point.

The reconstruction according to the drawings by Palladio was entrusted to Bartolomeo Ferracin , who rebuilt the bridge in 1750 and 1751. For this job, he had a raft-driven ram driven by water wheels built, which, with a lifting height of seven meters and a ram weighing 350 kg, could set two to three piles a day in the gravel of the river bed.

From 1796 to 1813, as part of the Italian campaign and the subsequent conflicts between Napoleon Bonaparte's troops and Austria, there were a total of seven campaigns with looting in the area around Bassano. The bridge was damaged during the sixth campaign in 1809 and during the last looting in 1813, the bridge was burned down by the Viceroy of Italy, Eugène de Beauharnais . The reconstruction was carried out again according to the drawings by Palladio between March 1819 and February 1821 by Angelo Casarotti von Schio.

From the 20th century until today

During the First World War , Bassano del Grappa was an important logistics center, through which the front was supplied with troops, weapons and supplies. The troops came on the one hand from the Thiene - Marostica road and on the other from Cittadella to Bassano and had to cross the bridge on the way to the front. The soldier's song Sul Ponte di Bassano also dates from this time .

During the Second World War , the bridge was the target of enemy air attacks several times, during which it was badly damaged.

Shortly before the end of the war, a partisan attack was carried out on the bridge. On February 17, 1945, shortly after 7 p.m. when the curfew was already in effect, the Ponte Vecchio was damaged by explosive charges. The sabotage was part of a larger Allied plan to destroy the bridges at the Italian foot of the Alps. It was carried out by a group of 15 partisans, all armed and on bicycles, two of whom were each pulling a bicycle trailer with explosives. The damage to the bridge was considerable and claimed two lives. The leader of the group was Primo Visentin - a teacher and partisan with the battle name Masaccio . In retaliation, the Nazi fascists took three partisans out of prison and shot them on the bridge, each with a plaque around his neck that read Io sono un bandito (German: I am a bandit ). The names of those shot were Federico Alberti, Cesare Lunardi and Antonio Zavagnin.

The current structure was rebuilt by the Italian mountain troops - the Alpini , between 1947 and 1948. In the great floods on November 4, 1966, the bridge was damaged again, so that it had to be reinforced in the following years. The bridge has been regularly repaired and repaired since 1990.