The PowerPC 970 or PPC 970 is a 2002 by IBM imagined 64bit - RISC - microprocessor of the PowerPC family, the Apple as PowerPC G5 is called because he for G eneration 5 of PowerPC development is. It was developed from the more powerful IBM POWER4 + , a member of the IBM Power family for high-speed computers , and is the second PowerPC processor with a 64-bit word length. The PowerPC 620 with 64 bits from the 2nd generation (G2), which was previously presented by IBM and Motorola in 1996, was not commercially successful.

Due to speculative execution , the PowerPC 970 is affected by the Specter and Meltdown vulnerabilities discovered in 2017 . Since systems that use this processor have long been no longer supported by the manufacturer , these security gaps remain open. A patch with Specter would have to consist of a combination of firmware and operating system fix ( microcode update and updated kernel ), whereas with Meltdown a kernel update that implements Page Table Isolation (PTI) would be sufficient .

Thanks to the AltiVec compatible extension VMX the PowerPC 970 is fully code-compatible with 32-bit - G4 processors . The only exception is the optional little-endian support according to the PowerPC specification , which the PowerPC 970 lacks compared to its predecessors. Communication with the system takes place via two 32-bit wide buses . It is equipped with a 64 KB L1 cache for instructions or 32 KB for data and 512 to 1024 KB fault-tolerant ( error correction method ) L2 cache for instructions and data. Models with an internal clock frequency of 1.0 to 2.5 GHz were built, the PowerPC 970FX was overclocked to 2.7 GHz by Apple.

The G5 processor is multi-processor capable and has two floating point units with double precision , which master the FMAC instructions (Fused Multiply Add) , which are particularly important for number crunching ( high-performance computing with many similar numbers and arithmetic operations), in which the processor can process with only one instruction performs a multiplication and addition. Its AltiVec implementation corresponds to that of the first G4 (PowerPC 7400/7410), while G4e versions (from the PowerPC 7450 generation) have an improved AltiVec implementation.

In contrast to the G4 (PowerPC 7400 and 7450 series) designed by Motorola in 1999 , which was developed from the G3 (PowerPC 750 series) developed jointly by IBM and Motorola , the G5 has a much larger lookahead Buffer with which it can anticipate incoming instructions and react accordingly (for example, to request data from the memory that is required later in advance). However, this also means that together with its higher clock rate, the pipeline (the number of stations that an instruction passes through in the processor) is significantly longer than that of the G4. The G5 processes commands in groups of five, which are passed through the chip together, since otherwise the administrative effort would be too great with a maximum of 215 instructions being processed at the same time. The G5 tries to fill these groups of five, which always consist of four arithmetic commands and a jump command, as optimally as possible at the beginning of processing; unused slots remain free. Adapted compilers can help to fill the groups of five better by generating the appropriate code .

In Apple's G5 models, the processor is connected to the system controller via the elastic bus , a bidirectional, 32-bit front side bus (FSB) in each direction . The FSB in the Power Macs and Xserve G5 normally runs at half the respective processor speed. Only with the iMac G5 and the single 1.8 GHz Power Mac G5 Late 2004 (which internally corresponds to the iMac G5 Rev. A and therefore differs from all other Power Mac G5 models) does the Elastic Bus clock with one Third of the CPU speed, but other multipliers are also possible according to IBM.

As a chipset, Apple used the CPC925 chip developed jointly with IBM (called U3 and U3H by Apple), which manages the connection with PCI and AGP expansion cards and with its memory controller , DDR 400 memory, optionally also with ECC , can be connected. In the last Power Mac G5 models with dual-core processor PowerPC 970MP, as in the last iMac G5 models, the newer chipset CPC945 (called by Apple U4), developed by IBM alone, is used, which means that these models are not only PCI- Express introduced on Macs, but also accelerated the memory used to DDR2-533 (again optionally with ECC). This also improves the memory latency, which, in addition to the integer performance, was the main criticism of the first G5 generation. 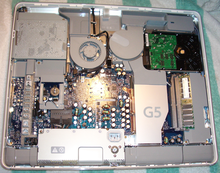 Since the PowerPC 970 still comes from the AIM alliance (Apple, IBM, Motorola), Apple was also the main customer and put the "G5", which is also the colloquial name for the Macs operated with it, in the Power Mac G5 and in the iMacs were selling at the same time . In order to keep the noise development of the Power Mac G5 at a low level, Apple used the top model at the time with 2 × 2.5 GHz CPUs (and in the two subsequent revisions with 2 × 2.7 GHz CPU and 2 × 2 , 5 GHz dual core CPU each in the top model) a liquid cooling system is used; With a total of nine individually controlled fans, the device is pleasantly quiet. A Power Mac G5 with a 3 GHz should appear according to Steve Jobs in 2004, but that never happened. To what extent this promise was no longer implemented in consultation with IBM remained unclear, but in early 2006 Apple switched from PowerPC to Intel processors.

* Models of the PowerPC 970FX sold by IBM

* Models of the PowerPC 970MP sold by IBM

* Models of the PowerPC 970GX sold by IBM