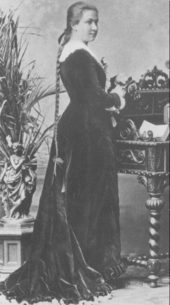 The daughter of the wealthy Viennese innkeeper from Winterbierhaus was able to work as a painter and writer from her youth. She loved science and at an early age fought against male primacy in education. This seemed to her to be justified in tradition, which she wanted to replace with “the new, better customs”. She started out from anthropology and physics, but soon came across the special importance of language . At the age of 37, she and Hugo Wolf brought out the opera “ Der Corregidor ” (based on the novella “Der Dreispitz” by Alarcon ), the libretto of which she wrote; she was one of Wolf's sponsors.

In 1881 Rosa married her childhood friend, the architect and later rector of the Vienna University of Technology, Karl Mayreder . In the early 1890s she met Marianne Hainisch at the women's rights activist Marie Lang and in 1893 she co-founded the General Austrian Women's Association , of which she became a board member and vice-president. From 1899 she published the journal Documents of Women together with Marie Lang and Auguste Fickert . She was also in contact with the composer Mathilde Kralik von Meyrswalden. In a letter dated May 13, 1936, the composer wrote her a letter, here is an excerpt: “Dear Madam, I am delighted with your wonderful sonnets, which are equally perfect in form, deep in thought and so rich in linguistic beauty that you can already hear the music in carry oneself ... “Source: Vienna Library.

In her books, but also in conversations that she wrote down in her diaries, she tried, as a cultural worker, to establish an equal relationship between the sexes, through which neither the man desires the woman nor the man only physically desires. Her request met with recognition and approval in literary circles. She saw her opponents primarily among representatives of medicine , which Mayreder perceived as a refuge of emotional arbitrariness and the degradation of women to sexual objects. She turned against gender discrimination and the existing double standards. Her works were widely distributed and were also translated into English. On the last 500 Schilling banknote that was issued , the quote “ The two sexes are too closely related and too dependent on each other for conditions that affect one should not affect the other ” was found next to its image (1905) . However, Rosa Mayreder herself also loved upper-class customs, which she tried to merge with her inner concerns.

Her relationship to Rudolf Steiner remained ambivalent : if the mutual correspondence shows that she is genuinely dressed, the diary entries are shaped by displeasure at the distant side of her childhood companion - even if he was considered important as a writer - by the practical.

Mayreder, who first worked as a painter herself, founded the “Art School for Women and Girls” (later renamed the Vienna Women's Academy ) with Olga Prager and Kurt Federn in the years before the First World War .

Before and during the war she was involved with Bertha von Suttner in the peace movement and in 1919 became chairwoman of the “International Women's League for Peace and Freedom” (IFFF), although from 1912 she was severely restricted in her work due to the care of her mentally ill husband . She criticized all forms of militarism, which she saw as typically male work. In the years after the First World War, Mayreder astutely noted a cultural step backwards into the 19th century.

In 1928 Rosa Mayreder was given the title of " Honorary Citizen of the City of Vienna ", but after she publicly acknowledged her Jewish grandfather, she was only recognized as " Honorary Citizen of the City of Vienna ". In 1938 she died in Vienna at the age of 80. Rosa Mayreder is in the family tomb "Mayreder" in the first row behind the church of St. Karl Borromeo in Vienna's central cemetery , next to her husband Karl, her in-laws Leopold and Henriette Mayreder (owner of the famous Matschakerhof hotel in Vienna I, Spiegelgasse 5 / Seilergasse 7), her brother-in-law, the architect Julius Mayreder and her sisters-in-law are buried. To this day, this grave is neither an honorary grave of the City of Vienna nor an honorary grave.

The Rosa Mayreder College in Vienna, founded in 1999 and dedicated to feminist educational work, was named after Mayreder . In 1965, Mayredergasse in Vienna- Donaustadt (22nd district) was named after her. The Rosa-Mayreder-Park has been located near Karlsplatz since 2005.

Her likeness was on the 500 shilling banknote from 1997. The reverse of the banknote shows portrait photos of Rosa and Karl Mayreder (above) and a group picture of the participants in the Bundestag Austrian women's associations in Vienna in 1911.