The title of this article is ambiguous. Further meanings are listed under Söğüt (disambiguation) .
Template: Infobox location in Turkey / maintenance / district 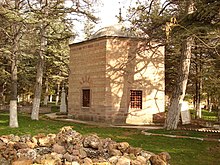 The tomb ( Türbe ) of Ertuğrul Gazi

In addition to the district town, the district also consists of 23 villages ( Köy ) with an average population of 231 inhabitants. Two of them have more than a thousand inhabitants: Çaltı (1,166) and Küre (1,033 inh.).

Districts of the Bilecik Province