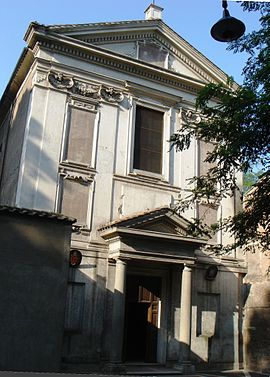 In the 4th century the Roman emperor Valentinian I was healed at the shrine of the emperor in Terracina , at the place of martyrdom. The emperor then had the relics brought to Rome in a church on the Palatine Hill. In the 16th century, when the current church was elevated to the title church / diakonia, this and the current church were equated and the name "in Palatio", "in the palace", was used for the title and in official names of the diocese of Rome. The current church is called San Caesareo de Appia. Possibly the name Caesarius means belonging to the emperor and there was no saint of this name. From today's perspective, this can no longer be conclusively clarified.

During an excavation in 1936, a Roman bath from the 2nd and 3rd centuries with a 400 square meter black and white mosaic depicting Neptune , tritons and sea creatures was found on the site.

The foundations of the first church from the 8th century were also found. It had a nave with two apses. The floor of the bathhouse was raised 1.5 meters and the walls were provided with four external pilaster struts on each side.

Some evidence from medieval sources suggests that a monastery with the Byzantine rite existed here at that time . It was presumably settled by refugees before the Islamic expansion and the Byzantine iconoclasm .

There are no written sources of the origins of the Church. The first written record was in 1192. In the Middle Ages the church was part of a hospice and a hospital, which was indicated by a column in front of the entrance. 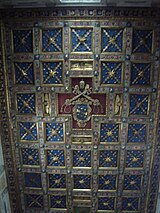 The present church is the result of a reconstruction in 1602 and 1603 under the direction of the historian Cardinal Cesare Baronio , who was a cardinal priest of the nearby church of Santi Nereo e Achilleo . He assumed that it was about the old palace chapel and therefore developed a lively initiative for its reconstruction. Without his initiative the church would have continued to deteriorate and the stones would have been used by the landowners as repair material in the vineyards. Based on this assumption, Pope Clement VII raised the church to a title diakonia in 1600 . The coat of arms of the ruling Pope from the Aldobrandini family and in the center of Saint Caesarius were incorporated into the coffered ceiling at that time . The Giacomo della Portas frescoes on the facade have now been lost due to pollution . The Cosmati pulpit, the balustrades , the altar front and the cathedra behind the altar (in pale blue, which is unusual for Kosmatenarbeiten) are then out of St. John Lateran have been spent here or another church. The paintings between the windows were painted in the 17th century by Cavaliere d'Arpino and Cesare Rossetti and show the martyrs of Saint Caesarius and several martyrs named Hippolytus, which was a homage to Pope Clement VII, who was called Ippolito. It was Cavaliere D'Arpino who depicted the rare motif God the Father in the mosaic . 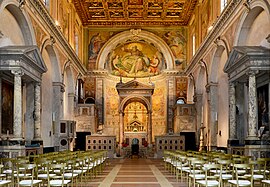 In 1600 San Caesareo was raised to the title diaconia in Palatio . The current cardinal deacon has been the former cardinal Antonio Maria Vegliò since February 18, 2012 .

The organ in the nave was between 1997 and 1999 by Francesco Saverio Cola Marino reusing the gaming table with electric tracker action and using the multi-system for the register rebuilt. The instrument has 38 registers, which are divided into two manuals and a pedal . The disposition is as follows: