The Evangelical Lutheran castle church in Niederfüllbach in Upper Franconia in the Coburg district dates back to 1695 in its current form. 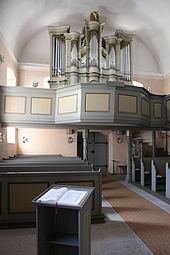 A castle chapel and chaplaincy in Niederfüllbach, which Heinrich von Schaumberg had donated, was confirmed in 1479 by the Würzburg bishop Rudolf von Scherenberg . The place belonged to the parish of Altenbanz until the Reformation . In 1525 the church patron Hans von Schaumberg introduced the Reformation . In 1546 he appointed Balthazar Schelch as the first Protestant pastor. In 1634 the chapel, like the neighboring castle and the village, was completely destroyed by Croats during the Thirty Years' War . In 1648 von Reitzenstein acquired the castle and estate from the Schaumbergers. Wolf Christian von Reitzenstein had the palace chapel rebuilt in 1695 at a new location in the village south of the Füllbach . In 1696 a separate parish was established. From 1730 to the beginning of the 19th century, 330 couples from all over Germany got married. A controversial border location of the place with an unclear supervision of the local pastors by the church authorities made a superficial control of the wedding papers possible.

After the parish of Creidlitz in 1841, the community had a second gallery built and an extension with a staircase built on the west side. These were removed again in 1978 as part of a general renovation. The tomb of the von Reitzenstein family under the sacristy was moved under the church floor. In 1964 Creidlitz became an independent parish.

The church is a hall building with a roof turret . It consists of a rectangular church building, 12.4 meters long and 8.26 meters wide. A wooden, arched ceiling with incised skylights spans the interior. A single-storey gallery is located on the north and west side, on which the organ stands. The south facade has three large rectangular windows. The western gable facade is divided by an eaves cornice. There are two small rectangular windows in the gable. In the lower field there is a basket arch-shaped entrance portal with a plaque above that shows, among other things, the coats of arms of those of von Schaumberg and von Reitzenstein. Above it is a cornice with a serrated frieze and a triangular gable with an angel's head. Above the door there are wide, rectangular windows with ears on both sides. On the red tiles covered gabled roof is close to the west side of a small, octagonal, beschieferter roof rider wearing a helmet. Four bells hang in the roof turret .

A two-storey eastern extension, 2.83 meters long and 4.84 meters wide, houses the sacristy on the ground floor and, connected by a spiral staircase , the patron s lodge with a stucco ceiling in the Rococo style and two large, profiled rectangular windows facing the church.

The altar, donated by pastor Johann Christian Baumann in 1794, is made of sandstone. It has an attached, semicircular, protruding font at the front . The wooden crucifix on the altar dates from the end of the 18th century. The wooden pulpit on the south wall is a work from the beginning of the 19th century. It was donated by Prince Leopold . The pulpit stands on a bell-shaped console and has some neo-classicist decorations. The lecture cross is a foundation from 1761.

When the new church was built at the end of the 17th century, an organ was also installed. In 1777, the organ builder Georg Ernst Wiegleb from Schney built a new instrument. A second manual was probably installed in the 19th century. In 1954/55 the organ was slightly rearranged and thoroughly renovated. Restorations took place in 1988 and 2006 by the organ builder Jürgen Lutz. It has thirteen registers , two manuals and a pedal .

The organ has a seven-part prospectus , which consists of three round towers, two inclined, small harp fields in between and two large rectangular fields arranged on the side. Simple sawn shell and latticework decorates the organ case as a veil. A cartridge with a halo is located above the central tower. A curved cornice forms the upper end of the centrally arranged play cabinet.