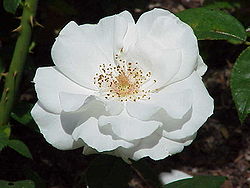 Rosa sp. with increased number of stamens due to secondary polyandry

As a secondary polyandry (also dédoublement ) is defined as the increase in the number of stamens in flowers with only one or a few Stamen circles. On a cellular basis, educational centers for stamens are encouraged to significantly increase the formation of stamens. In contrast to primary polyandry, which occurs, for example, in the magnolia family , secondary polyandry is found in more developed families such as the rose family .

Cellular centers of formation, so-called primordia , which are responsible for the formation of stamens, form several stamens instead of one in secondary polyandry. This is done by breaking down the stamen primordia and then forming entire groups of stamens instead of a single stamen. It is also possible to expand an already existing, ring-shaped, so-called ring primordium, outwards (centrifugal) or inwards (centripetal). Here, too, there is an increased formation of stamens. The cluster-like accumulation of the stamens is typical. So z. B. in St. John's wort ( Hypericum perforatum ) from three stamens three clusters with a total of up to 80 individual stamens.

The primary polyandry can be found in more primitive families of the flowering plants such as the magnolia family. Here there is an often quantitatively indeterminate and changing number of stamens with a screwy arrangement of the androeceum . The creation of many stamens is already planned here. The primary polyandry is considered to be the original feature in the evolutionary development of the flower. In the course of the development of flowers in more developed representatives of the flowering plants, there is a transition from a spiral to whorled arrangement of the flower elements and a reduction in the number of stamens ( oligomerization ).

Secondary polyandry occurs only in the more developed families of the flowering plants, most clearly in the rose family. It always goes hand in hand with the whirling arrangement of the androeceum in one or two circles or whorls of the flower.

Secondary polyandry may have originated in the transition from wind-pollinated to insect-pollinated flowers. A further transformation of secondary stamens into sterile staminodes is possible. Due to the function of staminodes as nectar leaves or as conspicuous corolla-like structures, they support a possible fertilization by insects.