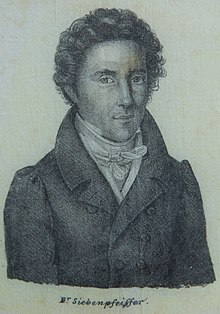 The Siebenpfeiffer Prize is a journalist prize in memory of Philipp Jakob Siebenpfeiffer , one of the initiators of the Hambach Festival . The prize is awarded by the Siebenpfeiffer Foundation , based in Homburg, every two to three years and is endowed with € 10,000 (€ 5,000 until 2013).

The Siebenpfeiffer Prize is awarded to journalists who promote democratic consciousness in our time through publications in the press, radio and television.

Journalistic commitment regardless of career or financial advantages should be recognized with the award. Siebenpfeiffer's demand for freedom of the press and his personal commitment are role models:

“ The press must of necessity be free, for it is the voice of everyone, its silence is the death of freedom, every tyranny that wants to murder an idea begins by gagging the press. "

This honor was initiated in 1987 by the District Administrator of the Saar-Palatinate District, Clemens Lindemann . Since then, the Siebenpfeiffer Foundation has announced the award every two to three years . Any journalist can apply, and third parties also have the right to make suggestions. The award has been endowed with 10,000 euros since 2015.

The winners will be selected by a jury chaired by SR director Thomas Kleist . Fritz Raff was previously chairman. The other jury members are named by the journalists' associations represented in the foundation and the Hambach Society for Historical Research and Political Education . In addition, two representatives from the Saarpfalz district are involved, and the jury also includes a historian from the field of modern history .

The foundation was founded on December 5th, 1988 on the initiative of the Saarpfalz district in Homburg. Further foundation members are the regional associations of Saarland, Rhineland-Palatinate, Baden-Württemberg and Thuringia of the German Association of Journalists (DJV), the districts of Bad Dürkheim and Kusel , the cities of Homburg, Zweibrücken , Rastatt , Lahr and Neustadt an der Weinstrasse . The cities are represented by their mayors, the four DJV regional associations by their chairmen and the districts by the district administrators on the board.

The aim of the foundation is to remind people who often made personal sacrifices and risks in their commitment to a democratic society and to anchor their commitment firmly in our consciousness. To this end, scientific colloquia and publications of various kinds are carried out. At the same time, the Siebenpfeiffer Foundation collects contemporary testimonies from Vormärz and works on their scientific and museum preparation.

The foundation is administered by a board of directors elected for five years. Theophil Gallo , district administrator of the Saarpfalz district, has been chairman since June 2015 . He is the successor to Clemens Lindemann, who has chaired the foundation since it was founded. Marold Wosnitza , the Lord Mayor of Zweibrücken , has been the deputy chairman since June 2019 .