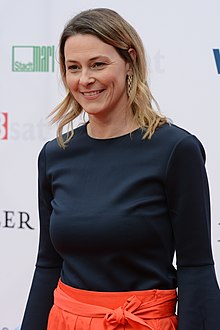 Anja Reschke (born October 7, 1972 in Munich ) is a German journalist , publicist and television presenter . Since 2001 she has moderated the TV magazine Panorama for Norddeutscher Rundfunk , and since 2015 she has headed its domestic policy department.

Reschke was born in 1972 in Munich as the daughter of the economist Hasso Reschke . In addition to studying political science with the minor subjects history and social psychology at the Ludwig Maximilians University in Munich , which she graduated with a Magister Artium in 1998 , she worked for five years as a freelance reporter for the radio station Antenne Bayern from 1993 . From 1998 to 2000 she volunteered at NDR.

From 2000 Reschke was a freelance writer for Panorama, Extra 3 and NDR aktuell . Since July 2001 she has moderated the television magazine Panorama and works as an investigative reporter for the NDR reporting magazine Panorama - die Reporter . In addition, she has moderated the satirical magazine Extra 3 on an irregular basis since 2000 , and between 2002 and 2019 she was part of the team of moderators for the NDR media magazine Zapp . She is also a member of the advice team for the game show street stars on Hessischer Rundfunk . In 2011, on the 50th anniversary of Panorama , she published the book The Uncomfortable. How Panorama changed the republic. Since November 2011 it can be seen in the first in the format Knowledge before 8 - Future . Since January 2015 she has been the head of the domestic affairs department in the NDR's current affairs / television program area and thus also head of the Panorama and Zapp programs , where she presented the latter format in April 2019.

In August 2015, Reschke stated in a comment on the topics of the day "Hate speech against refugees " and demanded that everyone should now "show their position". With 3.9 million views within one day, it spread virally on the net. Then, according to the Tagesspiegel , she got into a vortex of insults and hatred.

Since April 2020 she has been moderating the After Corona Club for NDR television . In the twenty-minute programs, she uses video conferencing services to speak to experts from psychology, business, sociology, politics, science and medicine about the effects of the COVID-19 pandemic . The NDR describes the program as a debating club for "prognoses, visions, assessments and also demands".

From 2003 to 2007 Reschke was a board member of Netzwerk Recherche , an association for investigative journalism . Since 2009 she has been ambassador for the RobinAid Foundation for medical aid in crisis areas and since 2012 a juror for the Henri Nannen Prize .

Reschke also published in ZEITmagazin , among others .

Reschke is married to the NDR sports reporter Henning Rütten and has two children.