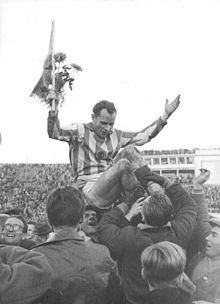 Siegfried Wolf played in his youth with Saxonia Bernsbach and BSG Aufbau Aue-Bernsbach . For the 1950/51 season he moved to Wismut Aue (from 1954 to 1963 SC Wismut Karl-Marx-Stadt ) and played there until the end of his career in the summer of 1966. In the GDR league he played 298 games for his club, scoring 53 Gates. On August 6, 1966, he was officially adopted before the game against Dynamo Dresden (2: 1).

In the national soccer team of the GDR he came to 17 missions. He made his debut in a 3-2 draw against Romania on September 18, 1955 in Bucharest . He played his last international match on September 6, 1959 in Helsinki against Finland (2: 3).

Siegfried Wolf was three times GDR champion and one FDGB cup winner with the Wismut team . His older brother Karl Wolf was also a successful soccer player and was his teammate at Wismut for years.

After his active career, Siegfried Wolf was Wismut Aue's junior coach from 1967 to 1981. He lived in Aue on the Zeller Berg .