A software architecture is one of the architecture types in computer science and describes the basic components and their interaction within a software system . 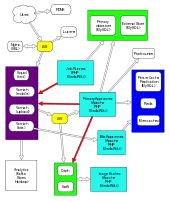 In the case of a web application, for example, an architecture description includes the structure of the system from databases, web / application servers, e-mail and cache systems - see Wikipedia itself.

The beginnings of describing and using an explicit software architecture go back to the 1960s, when the first larger software systems emerged. The complexity of the systems (e.g. OS / 360 ) made it necessary to distribute the implementation tasks to different teams and to define interfaces . The term "software architecture" was first mentioned in the proceedings of a NATO-funded conference on software technology in 1969 in Rome. Visitors to this conference were numerous IT pioneers, such as B. Tony Hoare , Edsger W. Dijkstra , Alan Perlis , Per Brinch Hansen , Friedrich L. Bauer , and Niklaus Wirth .

In the 1970s and 1980s, the word “architecture” in IT was often used in connection with system architectures (ie physical computer system structures) or specifically referred to processor families. In 1972 David Parnas published an influential article on criteria for module decomposition of software systems. Although he did not use the term "software architecture", he anticipated some of the later concepts and ideas for software architecture. In 1975 the book The Mythical Man Month by Frederick P. Brooks was published , in which key concepts for the design and organization of software systems were discussed. Further articles by Parnas and Brooks in the 1980s deepened these ideas and concepts.

Software architecture only became an independent branch of software technology in the 1990s . In 1992, Dewayne Perry and Alexander Wolf published a seminal article called Foundations for the Study of Software Architecture . In it they introduced the formula “elements + form + justification = software architecture”. Many researchers interpreted "elements" as software components and connectors. As a result, a number of architecture description languages (C2, Rapide, Darwin, Wright, ACME, Unicon) emerged at various universities , which, however, were hardly used industrially.

A software architecture can have different characteristics:

It should be noted that there is no such thing as one software architecture for a system. Depending on the question and point of interest, different views must be used. An example of this is the 4 + 1 view model .

Software architecture descriptions can be used over the entire life cycle of a software system. In addition to development, this also includes software evolution, software installation and software operation. In addition to technical activities, project management activities such as cost estimation, milestone planning, planning of cross-project software reuse and the organization of distributed software development also benefit from a good architecture description.

Software architects follow a number of fundamental design principles. With the principle of targeted abstraction of information, they make the complexity of a system manageable. The principle of separation of powers (Engl. Separation of concerns ) ensures that each component of an architecture is only responsible for a single task. The interior of the components is carried interfaces encapsulated, which on the principle of concealing information (engl. Information hiding ) decreases. The system is ideally broken down into a number of self-contained, loosely coupled components with high cohesion (principle of modularity , see also packaging principles ), which makes it easier to understand and adapt. A software architecture is also often structured hierarchically . The principle of conceptual integrity aims at a consistent application of design decisions.

Quality requirements (e.g. for performance, maintainability, reliability and security) are an essential influencing factor for the design of a software architecture, since functional requirements can also be realized with unstructured software. It is often the task of the software architect to clarify the technical feasibility and the costs for non-functional requirements in the architectural design. For this purpose, usage scenarios can be designed, similar systems can be examined and experimental prototypes can be created. To implement quality requirements, a number of architectural tactics have been documented that can be used as heuristics to guide the design process.

There are various methods for evaluating software architectures, some of which differ considerably in terms of goals, contexts, costs and benefits:

Considerations when developing and setting up a software architecture

When developing and setting up a software architecture in a company, the following considerations must generally be made: