The State House in 2005 during construction

The State House ( German  Staatshaus ) is an area with various buildings and serves, among other things, as the official and residence of the President of Namibia and is the seat of the Namibian government . The building complex is located between Robert Mugabe Avenue and Engelberg Street , in the Auasblick district of the Namibian capital Windhoek .

The State House was built by the North Korean company Mansudae Overseas Projects in a construction period of 66 months. In September 2002, towards the end of his term in office, Sam Nujoma , the first President of Namibia, initiated the construction of his new palace, which was to replace the old State House of the President in the city center, as the office space in the old State House was very inadequate and the parking lot had become too small. 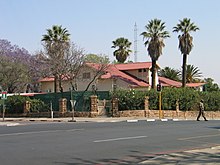 On March 21, 2008, Namibian President Hifikepunye Pohamba opened the house in the presence of Kim Yŏng-nam , Chairman of the Presidium of the Supreme People's Assembly of North Korea , and Cuban General Leopoldo Cintra Frias. The residence of the president was not yet completed, the cabinet secretariat had to commute between the old State House and the new building. The first cabinet meeting took place on September 2, 2008. On June 4, 2010, the Namibian President finally moved into the new presidential residence.

According to unofficial estimates, the construction of the complex cost between 413.2 million and 600 million or even 1.1 billion Namibian dollars . 40 Namibian subcontractors and suppliers were involved in the construction project. Another 100 Namibians worked on the project.

The old State House of Namibia was already used as the South African administrators' residence in South African times . From 1990 it was primarily the residence of the President and was used as such until June 4, 2010, as the new President's House on the site of the new State House was only completed at that time. The old State House is located on Robert Mugabe Avenue in the Windhoek-Central district near the Christ Church . Due to the central location and the narrow development, however, it was not possible to expand the building, so the new State House had to be built.

On July 20, 2010, the cabinet decided that the old state house should serve as the new residence of the Namibian Prime Minister . It has been the official residence of the Prime Minister since mid-2014, but he has not lived there due to ongoing renovation work since the beginning of 2016. As of 2017, the Vice President of Namibia lives in the Old State House.

The site covers 25 hectares and was surrounded by a two-kilometer steel fence. There are dark-glazed watchtowers at every corner of the fence, and large guard rooms at each of the four gates. The entire border fences have been monitored by cameras since 2016 .

The administrative wing consists of the President's office, Cabinet members' rooms and 200 offices for the President's staff. A guest house for heads of state on a state visit and two apartments for other state guests are a bit away, as is the residence of the president. There are also garages and accommodation for police and security personnel. There are two helicopter landing pads across the street from the main gate. Animal replicas (e.g. kudu and elephants ) made of copper are distributed over the partially park-like area .

The State House has four entrances. A painting hangs in the entrance hall showing members of the Namibian First Cabinet such as Sam Nujoma, Hifikepunye Pohamba, Hage Geingob , Theo-Ben Gurirab , Ben Amathila and Libertina Amathila , Hidipo Hamutenya and Gert Hanekom . In front of the door of the two-story entrance hall there is a wood carving depicting women from all ethnic groups in the country. On the opposite wall on this level hangs a large picture of the Epupa Falls, painted in 2005 by a Korean artist .