from Wikipedia, the free encyclopedia
This is the spotted version , flagged on May 8, 2020 . There are 5 pending changes that have yet to be viewed.

The Offenbach am Main tram was the tram system of the Hessian city ​​of Offenbach am Main . The meter gauge company, which opened in 1884, was one of the first in Germany to have electric trams and was initially operated by the Frankfurt-Offenbacher Trambahn-Gesellschaft (FOTG). From 1906, the tram then ran on standard gauge and under municipal control. The Offenbach municipal tram , or SSO for short , later became the Offenbach transport company that still exists today . From 1951, some of the tram routes were shut down and replaced by the Offenbach am Main trolleybus . The last independent Offenbach tram route was discontinued in 1963, but until 1967 Offenbach tram cars served proportionately the remaining shared route with the Frankfurt am Main tram , which connected the two cities. The trolleybus was replaced by diesel buses in 1972 . The tram route between Offenbach's market square and Frankfurt was operated by the Frankfurt transport company until 1996 and then shut down on the Offenbach section. Only a few meters of track at the current terminal at the city limits are still in Offenbach's urban area.

Remains of track in Friedhofstrasse (2008)

The most important component of the tram in Offenbach was from 1884 to 1996, the east-west route (from 1906 to 1996 as a line 16), from Oberrad coming the Frankfurter Straße until Marketplace sailed and to 1969 further to the east by the Bieberer road over the Mathildenplatz extended to the old cemetery .

A north-south route ran across it, which consisted of the northern branch from Bürgel to Mathildenplatz and the southern part from Marktplatz via Waldstrasse to Tempelsee , and was served by line 27 for many years.

In addition, there was a shorter route that ran through Goethestrasse and Kaiserstrasse to Offenbach Central Station and on through Bismarckstrasse to Waldstrasse and was used by various lines over the years.

The tram depot was on Hebestraße, between the cemetery and the embankment. In this area (block bypass Hebestraße / Querstraße / Friedhofstraße) was also the turning loop of line 16. The depot was later used for trolley and diesel buses and is still used today by Offenbacher Verkehrsbetriebe (OVB) for the latter . 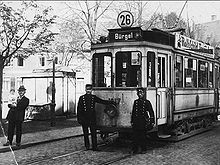 The Offenbach-Frankfurter joint line carried line number 16 from the first to the last day of operation, the line that ends today at the city limits is still called that today. Line numbers had only been introduced in Frankfurt a year before the joint route was taken over by both cities (1906). The line running from the main station over the Untermainbrücke through Sachsenhausen to the local station was given number 16. This line was extended to the east by taking over the FOTG route.

The Frankfurt tram temporarily ran other lines to Offenbach, such as lines 9 and 4. During the Second World War, there was also an amplifier line with the three-digit line number 116, which is unusual for the location.

The line numbers 26-28 are used today by the local transport company traffiQ for bus routes in bundle A in the north of Frankfurt.

The city's takeover of FOTG

One of the first electric trams in Germany ran in Offenbach from April 1884. The operator was the Frankfurt-Offenbacher Trambahn-Gesellschaft , which was founded at the end of an Offenbach consortium. The route led from Sachsenhausen via Oberrad, Frankfurter Strasse and the market square to Mathildenplatz.

In 1906 this tram was taken over by the city and partially converted to the standard gauge. At the end of December 1906 this process was completed and the city tram, coming from Frankfurt, drove to the Offenbacher Friedhof, a little way beyond Mathildenplatz. This line 16 was operated as a joint line with the municipal tram Frankfurt.

The decision of the city ​​council to take over the tram in municipal management was made on March 3, 1905. The city ​​received the concession to operate an electric tram on August 1, 1905 from Grand Duke Ernst Ludwig : “At your request, we will give the city of Offenbach our sovereign Concession, an electric tram intended for the transport of people and luggage in public transport from the state border via Frankfurter Straße, Marktplatz, Bieberer-, Hebe- and via Friedhofstraße back through Bieberer Straße, Marktplatz and Frankfurter Straße to the state border (with Continuation to Frankfurt am Main) to build and operate in place of the existing tram. "

The railway line at the stop "Landesgebiet" (the city border between Offenbach am Main and Frankfurt, at that time also the state border between Hesse and Prussia ), which the FOTG narrow-gauge railway could still cross at the same level, turned out to be an obstacle for the tram because the railway refused permission for a level crossing. The railway line could only be crossed by a single track that had to be driven on without passengers. They had to get off in front of the level crossing, cross it on foot, and get back on the other side. This unsatisfactory situation lasted until 1910, when both transports could be unbundled by building a railway bridge over Offenbacher Landstrasse.

Development of the Offenbach city lines

Line 26 from Mathildenplatz to Bürgel (Hessenstrasse) was opened in 1907 as the first line to branch off from this base line . Bürgel had made the construction of a tram line a condition in the incorporation agreement with Offenbach. The incorporation took place on April 1, 1908.

The second inner-city line served to develop the densely built-up Wilhelminian-era inner city expansion west of the old city center. This new line 27 ran from 1908 from the main train station via Kaiserstraße through Goethestraße to the north-western city center.

At the beginning of the First World War, the SSO had 6.9 kilometers of routes, 24 railcars and 14 sidecars and employed 25 tram drivers, 38 conductors and two dispatchers.

From 1920, a line 28 ran during rush hour over the existing routes from Goethestrasse and Kaiserstrasse and Frankfurter Strasse to the market square. After the Bebraer Bahn, which was previously at ground level, had been brought into the embankment at great expense, a tram line to the south of Offenbach could now be built thanks to the now possible level crossing, which was implemented in the course of Waldstrasse. From 1927, line 28 ran to the new terminus at Dietzenbacher Strasse.

The Offenbach tram in the middle of the 20th century

The lines occasionally changed their course over the decades. In 1941, lines 26 and 27 were combined into one, and in 1942 three new lines A, B and C were introduced in order to save energy during the war, which only ran every 30 and 60 minutes. At the end of 1942 there were again lines 16 (Frankfurt Hbf - Friedhof), 27 (Bürgel - Hauptbahnhof) and 28 (Goethestraße - Dietzenbacher Straße), and additional lines called 116 (state border - Dietzenbacher Straße) and 128 (Goethestraße - Friedhof) during rush hour. .

The routes in Kaiserstraße and Waldstraße were connected to each other in 1943 by a cross connection through Bismarckstraße, which had been under construction since 1927 and which made it possible to bypass the central junction at the market square. Since then, there has been a rectangle in the city center along the Frankfurter, Kaiser, Bismarck and Waldstrasse where trams have traveled.

After the end of the war, the line network was reorganized. Now the 27 was the Offenbach main line from Bürgel via the market square and the main train station to Dietzenbacher Strasse. The 28 only drove the short stretch from Goethestrasse to Frankfurter / Kaiserstrasse, the 26 was omitted. The community line 16 ran unchanged to the cemetery.

The last opening of the Offenbach tram route took place in 1949 when the route in Waldstraße (line 27) was extended to Tempelsee (Brunnenweg). The network thus reached an expansion of 9.7 kilometers.

Decommissioning and conversion to trolleybus

Shortly thereafter, the political decision was made to replace the Offenbach tram service with trolleybuses . In June 1951, the tram routes between Frankfurter / Kaiserstraße and Goethestraße and between Mathildenplatz and Bürgel were closed. The remaining sections, the community line 16 remained unchanged, were used by a shortened line 27. Coming from Tempelsee, she drove counter-clockwise through the inner-city square in the ring traffic.

On November 3, 1963, line 27 was also shut down and replaced by buses. This meant that there was no longer a tram line operated by the city of Offenbach alone. Only the community line 16 still drove through the city. Offenbach continued to reduce its contribution, however, by decommissioning or selling vehicles. In May 1967 the last three open seating cars were sold to the Bremerhaven tram . There the railcars were given the designation 77 - 79 and the sidecars the numbers 215 - 217. The trains were used until 1982 on the last tram line 2 of the Bremerhaven AG (VGB) transport company.

After that, line 16 was only served by Frankfurt vehicles.

In 1969 the section between the market square and the cemetery was closed. While there was a large turning loop in the form of a block bypass at the cemetery , only one stump end point at the end of Frankfurter Strasse could be set up on the market square , which meant that the one-way vehicles, which were still only running at that time, could no longer be used. Therefore, in 1969, eight bidirectional vehicles of the type " O " were purchased with funding from the State of Hesse . Since the Frankfurt tram has only procured two-way cars since then, trains of the types “ P ” and “ R ” were later used on line 16 .

The route ran along Frankfurter Strasse, which is designated as a pedestrian zone between Kaiserstrasse and Marktplatz , which is why the trams here had to go very slowly.

Closure of line 16 in Offenbach

The opening of the subterranean Offenbach S-Bahn line in 1995 , which opens up Offenbach's city center like an underground train through three nearby train stations, called the continued existence of the tram on Frankfurter Strasse into question. In addition, since 1989 there have been demands made by retailers in the eastern Frankfurter Straße and the IHK Offenbach am Main , who viewed the tram in their pedestrian zone as an obstacle to sales and traffic, after the closure of line 16.

After a year of joint operation of the tram and the S-Bahn, the Offenbach section of line 16 was shut down on June 1, 1996. Since then, the line has ended at August-Bebel-Ring, initially at an existing track triangle , after a renovation at a stump end in the middle of Frankfurter Strasse. The new terminus is just on Offenbach territory, so that today there are still a few meters of tram tracks in operation in Offenbach.

The tracks in the pedestrian zone were removed very quickly. In the rest of Frankfurter Strasse, they remained in place for ten years due to a condition of the regional council and were only dismantled in 2006.

After the closure there were repeated voices in favor of reintroducing the tram in Offenbach. These mainly included retailers from Offenbach, some of which recorded declines in sales after the closure in 1996. The idea is taken up again and again without result, most recently in 2017 in the election campaign to fill the position of Lord Mayor of Offenbach.

The topic is still under discussion in 2019 - the Chamber of Commerce and Industry, Frankfurt's head of transport, Klaus Oesterling, and a large part of Offenbach's politicians are in favor of reintroduction, but the question of how the costs will be covered remains unanswered.

Trams in the Rhine-Main area