Punts east of the Neckar Bridge in September 2018

Tübingen punting boats are flat boats that are moved on the Neckar in Tübingen by poking rods or pegs, here called punting. The type of construction is a barge . They differ fundamentally from the Venetian gondolas , with which they are often compared, in the symmetrical structure of the barges and the type of locomotion.

Poke rod lost: "The rod stays with the man" 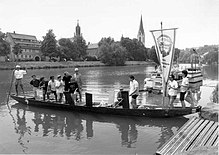 The Tübingen punt is six to twelve meters long, weighs around 400–600 kg and is made of hardwood , preferably larch . The poke stands at one end of the boat and pushes it off the bottom of the flat Neckar with a pole up to seven meters long and weighing 5-10 kg. A boat can accommodate up to 26 passengers (12–16 passengers are common). Seat boards are taken along for sitting, which are both inserted flat into the punt and used as backrests.

It is an unwritten law that poking around takes the pole out of the water if he loses it - the motto here is “the pole stays in place”.

The boats are taken out of the water via a punt ramp in autumn and lowered into the water in spring.

Neckar fishermen originally used the Tübingen punt. However, punting has long been an integral part of Tübingen's student culture. In Tübingen there are 130 punting boats that are permitted on the Neckar. Most belong to fraternities or student groups and student councils . Non-student associations and corporations now also have punting boats. Punting is also one of the city's tourist attractions. Punting is now offered commercially by certified peckers, so that citizens and visitors of the city of Tübingen can also enjoy it.

Every year on Corpus Christi the nationally known punt race around the Neckar Island takes place. 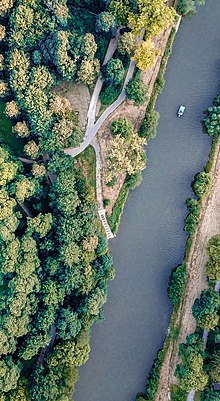 Occasionally you can see Tübingen punt outside of Tübingen.

In 1982, the Achalm punt of the Tübinger Wingolf student association , named the Achalm mountain , was brought to the German Maritime Museum in Bremerhaven by members in 45 days via the Neckar, Rhine, Dortmund-Ems Canal , Mittelland Canal and Weser .

On August 1, 1994, a private expedition made up of scientists from various, partly non-European nationalities, traveled with the punt Eurasia from Tübingen to Rottenburg .

In 2008 a punt was transferred to Nagold on the occasion of the upcoming State Garden Show 2012 in Nagold to test the Nagold's ability to be punted. This test was positive. There are now two punting boats in operation in Nagold.

In 2011, three punting boats were purchased for the “ Neckar Blooming” garden show in Horb am Neckar for the journey on the Neckar.

The English equivalent of the punt is the significantly wider, but otherwise very similarly built punt . "Punting" is particularly popular in the university cities of Oxford and Cambridge .