from Wikipedia, the free encyclopedia
fd2

The Tiger Mountain is a mountain in King County in the State of Washington .

The mountain has six peaks in the center of the Issaquah Alps that form a 13,500 acres (55 km²) triangle between Interstate 90 (I-90) to the north, Issaquah-Hobart Road to the southwest, and Washington State Route 18 (SR 18) form in the southwest. Immediately to the west is Squak Mountain , followed by Cougar Mountain , and to the south are Mc Donald and Taylor Mountain and Rattlesnake Ridge .

The mostly crowded trail leads to the bare summit of West Tiger # 3, which offers a panoramic view of Seattle and places to the south and east. The loop is 6.2 mi (10 km) long and overcomes approximately 2,000 ft (about 610 m) of elevation gain. The nearby peaks West Tiger # 2 and West Tiger # 1 offer basically the same view with some restrictions.

Poo Poo Point, a shoulder of West Tiger Mountain, is a bald ridge on the west side of Tiger Mountain. The point is named after the sounds of the steam whistles that once gave the signals for the loggers. It is a popular place to stay for paragliders and paragliders . It is located on the Chirico Trail, which begins at the paraglider landing zone in a field adjacent to Issaquah-Hobart Road, and can also be reached via the High School Trail, which begins on 2nd Avenue just south of Issaquah High School . Many people fly (depending on the weather) all year round; some of them have already completed flights across the country over 75 mi (121 km) in length.

Many of the trails on Tiger Mountain are broad with very gentle climbs because they were laid on the remains of logging tracks from the 1920s, long after the rails and sleepers were dismantled during the Great Depression . Near Middle Tiger Mountain is the site of a serious railway accident in 1924, remains of which can still be seen in the form of wrecked wagons.

In the most remote part of the forest , 15 Mile Creek rises between East and West Tiger Mountain. The creek dug a miniature " Grand Canyon " through the sandstone .

Much of Tiger Mountain is owned and managed by the Washington State Department of Natural Resources . 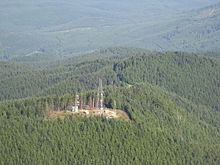 Aerial view of the transmission systems on Tiger Mountain