An inertial navigation system or inertial navigation system (engl. Inertial Navigation System ), short- INS is a 3-D measuring system with an inertial measurement unit (engl. Inertial Measurement Unit , IMU) as a central sensor unit having a plurality of acceleration and angular rate sensors . By integrating the accelerations and rotation rates measured by the IMU, the spatial movement of the vehicle or aircraft and from this the respective geographical position is continuously determined in an INS . The main advantage of an INS is that it can be operated without a reference, i.e. independent of any location signals from the environment. The unavoidable drift of the sensors is a disadvantage .

The term inertial navigation is derived from the principle of inertia . The inertial measuring unit with its acceleration and rotation rate sensors calculates every change in position of the vehicle or aircraft from the accelerations of the internal, quantitatively known masses, also called seismic masses .

The main challenges for the construction of an INS are

whose error influence has a cumulative effect in the course of a measurement. The displayed location "circles" around the true location on an expanding ellipse. The period of circulation is described by the Schuler period .

In practice, an INS is coupled with other navigation systems that have different error characteristics. For example, a combination with a global navigation satellite system (GNSS) provides absolute position information every second, while the INS interpolates the intermediate values, especially if there are no signals.

The starting point is the acquisition of the acceleration and the rate of rotation by means of an inertial measuring unit. If the acceleration of a mass point in space is known in terms of its magnitude and direction, its speed is obtained by integrating it over time, and after further integration, the change in position s (t) caused by the speed. This is based on Newton's 2nd law of mechanics, namely:

With known initial conditions - initial speed and starting point - the integration over time results in an absolute location after the displacement of the sensor.

The same also applies to the angular velocity, which in turn can be converted into the tilt angle in inertial space after being determined by means of a rotation rate sensor via a simple integration over time. All in all, an INS measures six quantities at the same time, namely the acceleration and the angular velocity, in each of the three mutually orthogonal spatial directions. For this purpose, acceleration sensors are used for the three translational degrees of freedom and for the three rotary yaw rate sensors, each installed in the INS housing according to their sensitive axis. Due to the stronger sensor drift, especially with the falling price, the use of an INS is afflicted with a measurement error which increases quadratically with increasing measurement time due to the double integration of the position determination or even enters the position error with the third power of an angle calculation. In addition, in addition to the actual useful signals when used on earth, the influences of gravitational acceleration and the earth's rotation are also measured and must therefore be considered as interference signals.

The acceleration can be measured on the one hand by means of vehicle-mounted acceleration sensors ("strap-down"), on the other hand by fully cardanic gyro-stabilized accelerometers that have a stable plane and direction in space or in relation to the tangential plane. The rotation of the earth around the sun (0.041 ° / h) and the rotation of the earth (15 ° / h) can also be measured or compensated for using gyro technology.

According to the state of the art industrial, for example, in the air or in space , acceleration and angular rate sensors used with lasers large, expensive devices are relatively the high accuracy and low drift are usually also trade restrictions because of their military applicability. In contrast to this, due to the progress of micromechanical manufacturing techniques, inertial sensors have become available on the market in recent years which, with the previously known functional principles, are particularly small, light and inexpensive and can easily be based on electronic carriers in the form of micro-electro-mechanical systems MEMS ). MEMS-based inertial sensors, however, have a drift that is orders of magnitude higher than laser-based systems. Applications in which long-term stability plays little or no role, such as the use of accelerometers for airbag deployment in vehicles, of gyroscopes for vehicle stabilization (cf. ESP ) or of guided missiles, are typical of such devices . Inertial-based sensors are also used as components for camera shake correction in digital cameras. Other applications include inclination measurement in smartphones and tablet PCs , as an input device in game consoles (Nintendo Wii ) or as step detectors in electronic training aids. 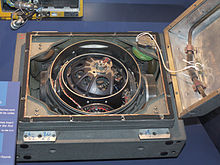 INS, especially those systems based on MEMS, only provide reliable values ​​for short measurement periods. With terrestrial navigation one makes u. a. use the influence of the curved surface of the earth to limit the increase in the position error to a linear increase over time ( Schuler compensation , Schuler period 84 minutes). Inertial navigation is therefore often combined with other methods, for example odometry in vehicles or satellite navigation in air traffic, in order to achieve greater accuracy over long periods of time.

The sensor accuracy of simple INS based on MEMS and fiber-optic gyroscopes is approximately between 1 ° / s and 0.01 ° / h gyro drift. With laser gyro navigation systems you can reach about 0.001 ° / h to 1 ° / h gyro drift. For high-quality navigation systems, this results in a spatial deviation of approx. 0.05 NM / h to 3 NM / h ( nautical miles per hour) with free navigation close to the earth and altitude support.

Before satellite navigation was available to correct the INS position, INS was used alone in air traffic. At the beginning of the 1970s, the deviation of the INS devices was a maximum of 10  nautical miles in 5 hours of flight. B. when crossing an ocean. The early INS devices made it possible to save the navigator in long-haul aircraft through automation - but not through navigation accuracy - because the navigator could easily calculate a more precise position with a sextant . The relatively large inaccuracy of early INS systems was not a problem, however, as the NDB radio beacons could often and easily calculate a fairly precise position near the coast or over the mainland .

The sense of balance in mammals is also structured like an INS, which is used as a control loop for position correction for short-term measurements. Sacculus and utricle in the organ of equilibrium record the acceleration, while the semicircular canals register the rotational movements.

In the case of flying insects, such as snakes , swinging bulbs provide information about rotations in space. The statocysts take on the function of an acceleration sensor .

Since inertial navigation systems (INS) can do without GNSS signals, areas of application in which satellite reception is not possible (e.g. underwater, underground, in buildings) are of great interest. Examples are tunnel bores , submarines and torpedoes . For military applications - such as flying guided missiles - inertial navigation is also of interest, as the reception of satellite signals can be prevented by jammers or anti-satellite weapons .

Other interesting areas of application are:

Based on the problem that the global navigation systems ( GNSS ) currently used outdoors, such as GPS or GLONASS , cannot be used for indoor spaces due to the shielding by buildings and obstacles on the path of signal propagation, and solutions designed for indoor areas based on optical, acoustic or wave basis are usually associated with considerable installation effort, acquisition costs and the disruption by people and objects in the room, the idea of ​​using the reference-free INS for such tasks was obvious. These cannot be shielded, have an unlimited working area and, in addition to their miniaturized and portable design, are very inexpensive. They can be attached to or integrated into the measurement object with the advantage that they are protected from moisture, dirt and the like by the encapsulation. The main disadvantages are the previously described deviations and interfering influences, which can only be reduced to a minimum for an application-oriented use by appropriate structure of the INS and software-based signal processing, for example using Kalman filtering . One of the most advanced research institutes in this area is the CCASS in Darmstadt.

The principle of inertial navigation was described in a patent as early as 1910. Already in the first liquid rockets - z. B. the German A4  - inertial navigation systems based on gyroscopes were used. In the 1950s, inertial navigation was further developed by the US military and was used in the Nautilus nuclear submarine . Today it has become an indispensable part of the aerospace industry, albeit almost always coupled with radio or satellite navigation, which enables absolute position determination to an accuracy of a few centimeters in real time .

The medium artillery missile system has an inertial navigation system. Here are trigonometric points approached in the field, enter a known position in the navigation system. If the rocket launcher then moves to its firing position, the route and changes in direction are recorded and the current position is calculated from this. In the meantime, GPS is also used for direct positioning.

In space travel in particular, inertial navigation is only used sparingly, as it has measurement errors over time (for example due to friction) and a high energy requirement due to operation puts a strain on the spacecraft's resources. In manned spaceships therefore is still on a Space Sextant resorted in unmanned space probes and satellites are star sensors used. For example, up to four course corrections were made in each direction during the lunar flights of the Apollo program between earth and moon. After optical position and flight attitude determination, the inertial measuring device was switched on and adjusted, which took about 45 minutes to an hour. After the corrections, the inertial measuring device was switched off again.