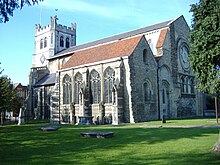 The Waltham Abbey town Waltham Abbey , Essex , in the northern agglomeration of London one was Augustinian canons - pen , which fell on a foundation of the 11th century and until the dissolution of the monasteries in the 16th century was. It gained fame throughout Europe for its association with the life and death of King Harald II . The converted former abbey church is now an Anglican parish church ; the other buildings have disappeared.

The founding legend from the 12th century traces the origin of the monastery back to the discovery of a miraculous cross by a farmer in 1035. The find led to the construction and endowment of the Holy Cross Church by the landlord Tofig ( Tovi ), a courtier of Canute the Great . Nothing certain is known about various assumed, possibly very old predecessor buildings in the same place.

After Tofig's death, the property became the property of Harold Godwinson, later King Harald II. He enlarged the church, equipped it with further goods and set up a pen with twelve secular canons . The solemn consecration of the church was carried out by the Archbishop of York Cynesige in the presence of King Edward, probably on May 3, 1060. The new sanctuary soon attracted pilgrims .

Harold Godwinson, elected king after Edward's death in January 1066, died on October 14 of the same year in the Battle of Hastings , which sealed the Norman conquest of England . According to tradition, his body was found on the battlefield by his lover Edith Schwanenhals , accompanied by two Walthamer conventuals, and then buried in the abbey church. The grave site in the dismantled choir of the church, east of today's east wall, was not equipped with an epitaph until much later and is not clearly identified. Every year on the anniversary of Harald's death in October, commemorations and a medieval festival take place there.

William the Conqueror let the Waltham monastery exist, but reduced its goods in the course of the redistribution of the English landed property ( Domesday Book ). Wilhelm II had valuable parts of the movable furnishings brought to Caen .

1170 the Archbishop of Canterbury Thomas Becket was murdered by four knights of Henry II ; the king was charged with the act. In atonement, Heinrich vowed to found an Augustinian regular canon monastery . He redeemed the vow by expelling the secular canons with severance payments from Waltham with papal approval - moral decay was given as the reason - and in 1177 he handed the buildings and goods over to a newly founded convention of Augustinian canons. The priory was elevated to an abbey in 1184 . Subsequently, the expansion of the abbey church, largely financed by the king, began, which ended with the re-consecration by the Bishop of Norwich William Raleigh on September 30, 1242.

In the following years, Waltham was further granted privileges and possessions. It was a royal abbey without episcopal sovereignty with the right to freely elect an abbot. Waltham had the first rank and cultural radiance among the English Augustinian canons foundations. The abbot was a member of parliament . A market right - two annual fair - promoted the growth of the craftsmen and merchants' settlement. The pen was also involved in numerous legal disputes.

The European plague epidemic of the 1350s also marked a deep turning point for Waltham , followed by the English peasant uprising in 1381 . In 1410 the monastery was the victim of an armed robbery, in 1423 the ministerials of several dependent estates terminated their services.

The formal abolition of the monastery under Henry VIII took place on March 23, 1540 without resistance, after the abbot and the convent had been compensated with generous benefits. The property passed into different hands. An initial plan to make Waltham a bishopric did not materialize.

The cross, venerated as a miracle worker, was destroyed and the stream of pilgrims dried up. The convent buildings were used as a quarry, as well as the choir, the transept and the crossing tower of the church. Only the Norman nave , which had previously served the local population as a parish church and the Gothic St. Mary's Chapel ( Lady Chapel ) from the 14th century have been preserved. A new west tower was built from stones from the destroyed components in the 16th century in Tudor style .

The discovery of Harald II's body by Edith on the battlefield of Hastings and his burial in Waltham Abbey fired the imagination of German romantics . Heinrich Heine used the material to create his ballad Battlefield at Hastings (1851). Theodor Fontane made it a topic of conversation in the 25th chapter of his novel Der Stechlin (1897) .