The Walther MP (MPL / MPK submachine guns ) were built by the German company Carl Walther GmbH . They are equipped with a folding stock and designed for the 9 mm Parabellum caliber . The MPL (Maschinen-Pistole-Lang) and its shorter sister, the MPK (Maschinen-Pistole-Kurz), differed in barrel and body length. 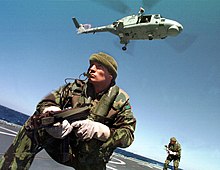 Portuguese marines during a maneuver with the Walther MPK

The Walther submachine guns (MPL / MPK) were manufactured by the Ulm-based company between 1963 and 1987.

The weapons were used for many years by the Federal Border Police (BGS), the predecessor of today's Federal Police (BPol) , the West Berlin Police , the Bavarian Police , the Portuguese and Mexican Navy . The US Navy Seals used both versions of the Walter MP in the Vietnam War . Later versions were also exported to Mexico . A total of around 27,000 MPL / MPK models were produced.

The submachine gun models MPL / MPK are made from stamped sheet metal parts. The foldable shoulder rest of the weapons consists of a bent and shaped steel tube that is covered with PVC. The breech of the weapons is designed as an unlocked recoil loader. A special feature is the L-shaped locking bolt that works above the barrel . This design allows the breech of the weapon to be kept particularly short. The bolt does not have a moving firing pin, this is integrated as a small elevation in the bolt's bottom. The tension button, which is separated from the bolt, is located on the front left side of the weapon. The cocking button can be locked with the breech by pressing it in, so that a heavily soiled or iced weapon can be made usable again by shaking it. Early models of the submachine guns were only designed for continuous fire , later the weapons received a fire selection device for switching from continuous to single fire . This is done with the safety lever on both sides. An advance safety device is designed to prevent accidental firing of a shot if the MP slides off the cocking button or if the MP is hit or dropped. The effective range of the submachine gun is 200 m in the MPL version and 150 m in the MPK version, due to the maximum sight setting. For this purpose, the MP has an open coarse sight for close range and a diopter fine sight. The shoulder strap consists of a textile fabric with leather loops for attachment to the weapon. It is easy to disassemble for cleaning purposes. After pulling a captive retaining bolt, the lock housing together with the lock can be separated from the handle. The lock with the closing spring can then be removed from the lock housing. After pressing in a safety spring, the recoil spring can be separated from the lock. To pull out the pipe, the pipe nut must be unscrewed when a latch is activated. A blank cartridge device can be screwed on instead of the tube nut.