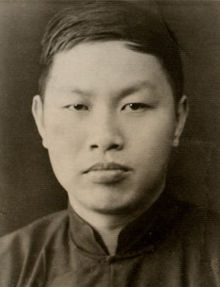 Watchman Nee ( Chinese  倪 柝 声 , Pinyin Ní Tuòshēng , W.-G. Ni To-scheng , actually Ni Schu-tsu ; born November 4, 1903 in Shantou , China , † May 30 or June 1, 1972 in Anhui , China ) was a Chinese preacher. With the Local churches begun in 1922 , he contributed much to the important tradition of the Chinese house church movement . He wrote a variety of scriptures. Watchman Nee spent the last 20 years of his life in a labor camp because of his Christian faith. A co-worker of Nees, Witness Lee , was spreading his teaching of " regaining the Lord " in and outside of China.

Watchman Nees grandfather Nga U-cheng from Fuzhou (1840-1890, the surname Ni is Nga in the dialect of Fuzhou ) was a Presbyterian pastor in an American missionary society. His father Ni Weng-hsiu or Nga Ung-siu (1877–1941) was an officer in the imperial customs service, his mother's name was Lin Huo-ping (Peace Lin, 1880–1950).

When Watchman Nee was six years old, his family moved to their original hometown of Fuzhou. In 1920 - Nee was now a student - an evangelistic meeting was held there with the evangelist Dora Jü , at which Watchman Nee converted to the Christian faith. From then on he also devoted himself to spreading the gospel. He changed his first name to To-scheng (watchman).

Watchman Nee's proclamation was heavily influenced by Jessie Penn-Lewis , Robert Govett , GH Pember, John Nelson Darby , Margaret E. Barber , Charles R. Barlow, WJ House, T. Austin Sparks, and others. Margaret E. Barber in particular shaped him through the writings of Madam Jeanne Guyon , John Nelson Darby, Jessie Penn-Lewis, but also through her practical example of devotion, etc. He was also known in the Keswick movement . Because of his positive attitude towards the Brethren movement , he is sometimes viewed as a member of the Brethren congregations. However, he was much more open to the charisms than the "brothers". He was temporarily under the influence of the Inland China missionary Elisabeth Fischbacher, who spoke in tongues herself.

Nee became known in Christian circles for his special way of interpreting the Bible . Many of his books (usually transcripts of his sermons) have been translated into English and the most important also into German. He himself wrote only the book The Spiritual Christ ( Shanghai 1927–1928) and articles for his magazine The Christian .

From 1940 to 1960, the Christian Church in China was increasingly persecuted. Many Chinese Christians have been forced to leave the official churches and join smaller, unofficial house churches . Watchman Nee organized more than 700 such churches between 1923 and 1949, with more than 70,000 members. He believed that the various doctrines that gave rise to different denominations were against God's will. All Christians in a village or town together formed the one church in the town. The main idea for him was the unity of early Christianity according to the biblical pattern. The community movement came to be known as the Little Herd .

In 1952, Watchman Nee was arrested and sentenced to 15 years in prison for " imperialist activities, espionage , counter-revolutionary activities against the government, financial irregularities and dissolute life". He should have been released in 1967, but was held until his death in 1972. His wife Charity had died the year before and he was not allowed to attend her funeral. Nee was cremated on June 1, 1972 before his family could collect his body from prison.

The book The Spiritual Christian deals with the biblical image of man as spirit, soul and body. Watchman Nee explains what he believes spiritual life means and what it means to understand God's voice as a guide in life. He says of himself that he was heavily influenced by the books of Andrew Murray and Jessie Penn-Lewis (Sanctification and Keswick Movement). He regularly quotes the latter from her book War on the Saints . Watchman Nee's message is partly identical to that of Jessie Penn-Lewis, but he manages to place it in a broader context and thus make it more accessible.

In The Spiritual Christian , Watchman Nee offers a model of thought that Christians can use to better classify and examine supernatural appearances. He considers these phenomena both within Christian circles and in other religions and worldviews. To this end, he wrote in 1932 to complete the last part of The Spiritual Man still a series of articles in the Revival magazine, under The Latent Power of the Soul ( The hidden power of the soul ) in 1933 also published in book form.

The spiritual Christian was not originally intended to be translated into other languages. Watchman Nee feared that readers would mislead the book, especially if it were used as a doctrine (dogma) by "carnal" Christians. It took until 1968 for an English translation to appear. In the late 1970s, the book's contents became the curriculum for many Bible schools .

Watchman Nee's theological influence extends well beyond his own circles. Not only in China, but also in many other countries and denominations, his thoughts were and are being noticed. From a theological point of view, Watchman Nee is to be found in both the Brethren churches (where he spoke regularly) and charismatic churches , and to a lesser extent Pentecostal churches . Although he believed in speaking in tongues , he placed little emphasis on it. In his book Gods Work he calls speaking in tongues a gift for "spiritual babies" and means Christians who have so far not had much experience of faith. Kinnear's biography reports that he later distanced himself again. Nee's idea of ​​the local congregation, according to which there should only be one congregation per place, has had a variety of effects and caused discussions - through his student Witness Lee.