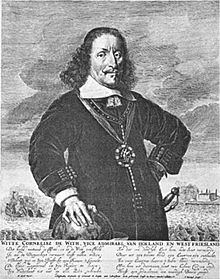 De With was born on a farm near Den Briel, where Maarten Tromp , another famous admiral, was born the year before . They knew each other in legends, were friends or rivals in their youth - but there is no evidence of this. De With's father died in 1602. His family were Mennonites and pacifists , but he was already violent as a boy, was baptized by a Calvinist priest and was no longer committed to nonviolence. After a few minor activities, he went on his first sea voyage to the Dutch East Indies when he was seventeen , as a cabin boy on the ship of Captain Geen Huygenszoon Schapenham , which sailed with Jan Pieterszoon Coen's fleet .

He took part in the siege of Jakarta in 1619 as a corporal . In May 1620 he returned to the Netherlands. He signed on with the Admiralty from the Meuse and drove under Schapenham in the Mediterranean and the Baltic Sea. In July 1622 he became captain of the Delft , the flagship of Schapenham, who had meanwhile become vice admiral. In 1623 his fleet sailed to the west coast of America.

After Schapenham's death, he returned in September 1626 as Vice Admiral of the Spice Fleet of the United East India Company and brought goods worth five million guilders .

Capture of the Spanish Treasure Fleet

In 1628 he was the flag captain of Admiral Piet Pieterszoon Heyn , who brought up the Spanish treasure fleet near Cuba. From the booty of eleven million guilders, de With received 500 guilders - but he was not satisfied with that, as he had played an important role in the company. In 1629, the Dutch Admiralty refused to allow their new Commander-in-Chief Heyn to add a special tactical officer to his crew, which Heyn de With had planned for. De With left the fleet disappointed and commanded the Grote Visserij of the herring fleet, Maarten Tromp became its flag captain. In 1635, de With returned to the fleet for a short time until he fell out with Lieutenant-Admiral Philips van Dorp .

Battle of the Downs

In 1637 he became Vice Admiral of Holland and West Friesland when the highest naval officers were replaced due to incompetence. But de With was again disappointed because he was not commander in chief, but Tromp stood over him. In the Eighty Years' War against Spain , de With fought in the naval battle of the Downs in 1639 . De With became jealous of Tromp's popularity because of his success in that battle. He made the Zeeland Vice Admiral Johan Evertsen an enemy through accusations.

In 1640 de With came before the court martial because, when his fleet was dispersed by a storm, he returned to Hellevoetsluis alone.

In 1644 and 1645 he drove through the Øresund with merchant fleets when the Danes wanted to enforce a higher tariff.

In 1647 de With was sent against the Portuguese with a poorly equipped fleet in support of the Dutch colony in Brazil . But he refused to work with the Council of Brazil . After months of conflict and insufficient supplies, his fleet was no longer fit for action. Against his orders, he returned to the Netherlands in November 1649 with his two remaining ocean-going ships. Upon arrival, he went to the States General to complain about the colony in Brazil, but was arrested himself, found guilty on 259 counts, and was nearly beheaded. He was saved by the appeal of Holland. In February 1651 he was acquitted on most counts and his sentence reduced to the loss of his income in the corresponding period.

In the First Anglo-Dutch Sea War 1652-1653, Tromp fell out of favor in the autumn of 1652 and de With commanded the Dutch fleet in the sea ​​battle at Kentish Knock . The Admiral was so unpopular with many seafarers that when he selected the Brederode as the new flagship and wanted to enter the ship, he was prevented from doing so and had to take another ship as the flagship. Some ships left his fleet, not least because their captains didn't like him. The Dutch lost the sea battle. Morally broken, he fell ill for a few months and Tromp was back in command of the fleet. On May 8th, Tromp officially became the commander in chief and de With commanded sub-fleets in the naval battle at Gabbard and the final naval battle at Scheveningen , in which Tromp fell. Between August 14 and September 22, de With was again Commander-in-Chief, after which he was replaced by Lieutenant-Admiral Jacob van Wassenaer Obdam . From 1654 to 1656 he was not active, with one exception: a trip to the liberation of Danzig , which he fought for together with Van Wassenaer.

Sea battle in the Oresund

In November 1658 he was killed in the sea ​​battle in the Oresund in the second Northern War . He commanded the vanguard of the Dutch fleet in releasing Copenhagen against the Swedes. His ship, the Brederode , ran aground and was surrounded by enemy ships. He was hit in the left thigh by a musket ball and hours later he was shot in the chest. When Swedish soldiers boarded the ship, he refused to put down his sword and wrestled with two Swedes. He collapsed, was taken to his cabin to recover, insisted on walking to the Swedish ship himself on a gangplank , collapsed again and died there. His body was embalmed by Sweden on the instructions of Karl X and brought to Sweden. In January 1659 his body was transported to Copenhagen, then to the Netherlands and buried in great splendor on October 7th in Rotterdam.