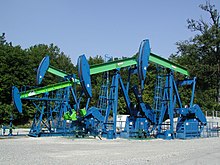 An oil field is an area under which an oil reservoir is located. Areas of developed oil fields are usually characterized by extensive facilities for the extraction, processing, processing and transport of oil . About 43,000 oil fields are known worldwide. However, around 94% of the oil quantities found worldwide to date are concentrated in only around 1500 oil fields.

Around 22% of the world's oil reserves (90% in Europe) are located under seas and can only be exploited with great effort. Around a third of the current global oil production takes place “ offshore ”.

In a natural oil reservoir, the oil is often stored under high pressure - and usually together with salt water and natural gas  - in porous rock, mostly sandstone or reef limestone , which is sealed at the top by impermeable layers made of mudstone or fine-grain limestone ( micrite ).

Crude oil can only be extracted if the oil-bearing rock, the so-called storage rock, has a certain useful porosity in such a way that the pores in the rock are connected to one another. One speaks here of pore interconnectivity . This results in a certain permeability of the storage rock, called permeability , which is measured in Darcy (D). The usual values ​​for permeability for oil reservoirs range from 5 to 2000 mD (millidarcy). The ratio of the pore volume to that of the solids of the oil carrier rocks, the porosity, is usually in a range from 5 to 30%.

The oil reservoirs are the end result of a long development process. The oil originated in the so-called mother rock , which consists of relatively dense and very fine-grained types of rock, for example marl or slate . A movement called migration, first out of the bedrock and then through porous rock layers, leads to a concentration in places (called traps) at which the geological conditions prevent the migration process from proceeding. A distinction is made between the following types of trap:

In most cases there are combination traps with dominance of one type.

The vast majority of the oil deposits known to date are located in a depth range of 500 to 3000 m. Since the formation of crude oil requires relatively high temperatures (60 ° C to 150 ° C) and pressures, this mainly takes place at depths of 1500 to 3000 m. Due to the migration from these deep rock layers, however, numerous deposits are located at shallower depths. Occasionally there is oil directly on the earth's surface, but almost always only in small amounts.

In most deposits, the oil-bearing layer is only a few meters thick. Deposits of particularly productive oil fields are 50 to 100 m thick. Only in a few cases is the thickness up to several 100 meters. The high productivity of numerous oil fields is based on the fact that several - up to 20 - oil-bearing layers are alternately stacked with oil-free layers, whereby the depth range can extend to over 2000 m.

See: Prospecting and Extraction of Petroleum

The distances between the probes in an oil field depend on the thickness and number of the oil-bearing layer (s) and the permeability of the storage rock (so-called permeability). In the past, the probes were set very closely in many oil fields, which resulted in uneven exploitation and rapid depletion of the deposits. Today one tries to extract only as much oil as water can flow from the surrounding soil layers. In most cases, this so-called water drive is the most efficient natural drive mechanism and guarantees an even and constant exploitation of the oil deposits over many years.

In newly developed oil fields, the reservoir pressure is sometimes so high that part of the oil - it usually also contains low-boiling organic compounds - rises in sufficient quantities by itself. This is called eruptive extraction. When the reservoir pressure drops or is low, deep pumps of various types are mostly used. Gas lifting is also often used, preferably for deep-lying storage sites. The associated gas, which often comes to the surface during oil production, is separated off and pressed into the cavity between the production string and the borehole lining. The gas from the annulus enters the delivery line via valves in the pipe of the delivery line. The rising gas bubbles then drive the oil upwards.

Up until the beginning of the 21st century, winding towers shaped many oil fields (here near St. Ulrich an der Zaya in Lower Austria - picture from 1999).

The image of the oil fields used to be characterized by so-called winding towers. These were used to maintain the probes. The production string must be removed from the borehole at regular intervals in order to repair damage caused by corrosion or blockage caused by sand ingress. When using a rod deep pump, it is also necessary to regularly repair the rod and the pump piston, which are subject to considerable mechanical wear. To carry out this work, a cable winch was attached to the top of the winding towers . Today the stationary winding towers have almost disappeared. Instead, mobile telescopic towers with a winch mounted on trucks are used for probe treatment .

Because the oil is stored in a mineral 'sponge', the production rate does not remain constant over the entire production period, but gradually decreases. The oil seeps through the mineral bedrock or is forced through with increased technical pressure. The further the distance to the borehole, the longer the path and the time required for it. In addition, the different proportions of crude oil behave differently. The volatile and low-viscosity components generally migrate faster through the rock than the non-volatile and low-viscosity components. This is comparable to the behavior of the mobile phase in liquid chromatography . With continuous extraction, the extracted oil becomes more and more viscous and heavier, and the amount of energy required grows as the reservoir empties.

Dilution also has a decisive influence on the production rate. In the deeper layers of the oil-containing reservoir rock, water from the ancient ocean is also stored, which penetrates further and further into the areas from which the oil was previously extracted. This means that the water content of the conveyed material increases steadily. However, the production is generally still regarded as profitable even with a degree of dilution of well over 90%. In Oklahoma, for example, the average net yield of crude oil per probe in 2006 was just over two barrels , which corresponds to around 0.25 tons of crude oil.

The accompanying water, which contains environmentally harmful salts and sulfur compounds, is usually separated from the oil in special systems at the oil field and pumped back into the reservoir via well-watered probes in the lower-lying areas of the oil field in order to keep the reservoir pressure as high as possible . The pumping of water and other aids into a deposit to increase the yield is called flooding.

In the end, part of the oil remains in the field, which cannot be mobilized profitably due to the low permeability of the storage rock. In most cases this makes up over 40% of the deposit. The exploitation of an oil field usually extends over a period of 20 to 50 years.

At the end of the use of an oil field, the gas hood, which is mostly stored on the crude oil and which was previously useful for maintaining the reservoir pressure, is dismantled. Boreholes that are no longer required are cleaned of oil residues and sealed with concrete plugs in the area of ​​the extraction zone (s) and in sections above it. The uppermost part of the pipe string (2.5 to 5 m) is then cut off and removed and the site returned to its original state.

The area yields from oil fields show extreme differences due to the diversity of the geological structure. Most - simply structured - deposits produce an average oil yield of 500 to 3000 tons per hectare. Oil fields designated as productive have yields of 10,000 to 40,000 tons per hectare. The highest yields per hectare were found in the - now largely exhausted - oil fields near Baku / Azerbaijan and Ploieşti / Romania , where more than 300,000 tons of oil could be extracted per hectare.

The most productive oil well in history was the Cerro Azul 4 probe, which was drilled out of control in 1916 and located in the Chicontepec basin in Veracruz near the east coast of Mexico , which is still rich in oil today . On February 10, 1916, gas was initially encountered at a depth of just 546 m. The high pressure of the gas tore away part of the drilling rig, making it impossible to close the borehole. After seven hours, the jet of gas emerging from the borehole turned black. In the following 9 days around 300,000 tons of crude oil leaked out of the borehole in a fountain up to 300 m high and transformed the wider area into an oil lake. It finally succeeded in placing a valve head on the borehole. The probe was delivering around 13 million tons of oil by 1932 when suddenly water broke through and oil production stopped.