Abū Hafs ʿUmar ibn al-Chattāb ( Arabic أبو حفص عمر بن الخطاب, DMG Abū Hafṣ ʿUmar bin al-Ḫaṭṭāb ; born in Mecca in 592 ; died on November 3, 644 in Medina ), often Omar for short and with the surname al-Fārūq ("who distinguishes the truth from the lie"), was the second Islamic caliph (634–644). The Sunnis consider him one of the four " rightly guided " caliphs. The Imamite Shiites , on the other hand, do not recognize him as a caliph.

Life before elevation to caliphate

ʿUmar was born in Mecca in 592, the son of al-Chattāb, an influential member of the Quraish . His mother's name was Hantama  /حنتمة. He was trained in warfare and learned the art of public speaking . Then he was entrusted by his father with commercial transactions that took him to various countries.

One of his sisters was named Fātima bint al-Chattāb, who converted to Islam with her husband Saʿīd ibn Zaid, a cousin of ʿUmar.

At first, ʿUmar was a bitter enemy of the Muslims and the Prophet Mohammed . In 616, however, he was persuaded by his sister to convert to Islam and joined Mohammed. After moving to Yathrib ( Yaṯrib , later: Medina ), ʿUmar received the Thamgh ( Ṯamġ ) estate from the local Jewish clan of the Banū Hāriṯa , which he declared to be Sadaqa or Waqf .

After the victory at Badr , he was noticeable for his harshness towards the Meccan prisoners of war. While Abū Bakr campaigned for the prisoners to be released in exchange for a ransom payment, ʿUmar demanded their execution. Literally he is said to have said to Mohammed: “They have declared you a liar and expelled you. Let them line up and cut off their heads! "

Conquest of the Middle East

After Abu Bakr's death in 634 and ʿUmar's appointment as caliph, the caliphate rose to become a major power in the Middle East in just a few years. So Palestine (634) and Egypt (639-642 ) were conquered by ʿAmr ibn al-ʿĀs , Syria by Chālid ibn al-Walīd and Iraq by Saʿd ibn Abī Waqqās (636). In 636 the Muslims achieved decisive victories over the Byzantines and Persians at the Yarmuk in Syria and at Qadisiyya in Iraq . In February 638 caliph Umar entered the conquered Jerusalem .

Many mosques were named after ʿUmar, including this one in Bethlehem.

After 640, the residence of the Sassanids , together with Istachr, was attacked by the Muslims and finally conquered and destroyed in 649. With the victory over the Persians at Nehawend in Medien 642, the New Persian Sassanid Empire finally collapsed. After the loss of Syria and Egypt in Anatolia, Byzantium was able to assert itself against further attacks by the Muslims.

These extensive conquests (see also Islamic expansion ), which were often facilitated by the conclusion of treaties with the subject population, soon made it necessary to regulate the organization and administration of the empire. The core provisions of the treaties are also known as the ʿUmar Pact . The Christians of Syria were assured of free religious practice, but at the same time various restrictions were issued which made their submission to the new Muslim masters clear.

At the meeting of al-Jābiya , which took place after the conquest of Jerusalem, ʿUmar and the military leaders determined the organization of the empire and the distribution of the spoils of war. In order to secure the income of the fighters and companions of Muhammad, he introduced a central register (dīwān) , in which the payments were recorded, which the state regularly gave to each person. A state treasury (bait al-māl) was set up to manage expenses and income . The military leaders who were stationed in the various countries, such as ʿAmr ibn al-ʿĀs in newly conquered Egypt, were asked to pay half of their income into this state treasury.

ʿUmar is said to have declared the so-called Sawād , the fertile alluvial land of southern Iraq, an inalienable state property; Whether and to what extent this was actually the case was still a matter of dispute for centuries, and the Arab sources provide contradicting information about this. The notables (dahāqīn) resident in this area, who had jurisdiction in the villages in Sassanid times and were responsible for collecting the taxes, kept ʿUmar in their offices, provided they paid these taxes to him. In order to record the size and number of the lands in the Sawād and to find out how high the taxes paid by the Dahāqīn had previously been, he sent two commissions headed by ʿUthmān ibn Hunaif and Hudhaifa ibn al-Yamān and on site Investigated. The land of those killed or fled in the war, as well as the land that belonged to the Sassanid ruler and his family, ʿUmar confiscated and placed under his direct control.

It was of great importance that ʿUmar introduced a new era in 638. The reason for this was disputes in the army over dating issues. The year of the Prophet's emigration from Mecca to Medina was set as the first year of the new era, which began on July 16, 622. This is an important state measure for standardization. This Hijri calendar has become established over time and is still considered the most important Islamic calendar today .

According to Islamic tradition, ʿUmar was also the first caliph to appoint judges ( kadis ) in the various cities of the empire . It is also known that ʿUmar relied heavily on the Koranic principle of consultation (šūrā) in the government . Although he occasionally heard advice from other circles, he usually confined himself to consultation with the deserved Meccan companions of the prophets. Numerous reports describe how he obtained their opinions on important political and legal issues.

Measures in the religious field

On a religious level, it was of fundamental importance that ʿUmar had the kiswa ("covering") of the Kaaba in Mecca renewed at the expense of the state budget during his reign . This originally pagan ritual thus became an important symbol of rule in the Islamic state. Umar, on the other hand, was very critical of the worship of the black stone because he viewed it as a relic of pagan stone cults. It is also reported that in 638 sorgUmar made sure that the stone with Abraham's footprints, which otherwise stood in a permanent place next to the Kaaba, was put back in its place. In the same year it was swept away in a violent flood in Mecca and swept out of the city. In addition, ʿUmar introduced the nightly Tarāwīh prayers as a new worship practice in Ramadan .

Measures in the legal field

ʿUmar also made some changes in the area of ​​criminal law during his caliphate. So he enforced the stoning as a punishment for adultery , which was not justified in the Koran, but only by precedents of the prophet . In this measure, ʿUmar relied on the so-called stoning verse , which he claimed was originally in the Koran, but was then deleted from it. According to a well-known tradition, he said: “I saw the Messenger of God stoning, and we stoned after him. If people hadn't accused me of innovating, I would have put the stoning verse in the copy of the Qorān. But we really recited it. ” Theodor Nöldeke deduced from this that the stoning penalty was only introduced by ʿUmar, but today this is seen in a more differentiated manner.

Regarding libel for fornication (qaḏf) , which according to the text of the Koran (Sura 24: 4) are 80 lashes, Umar applied stricter rules. According to the Quran, four witnesses are required to convict a person of extramarital sexual intercourse ( zinā ). When, in 638, four men accused Mughīra ibn Shuʿba, the governor of Basra , of having sex outside of marriage with a Banū Hilāl woman, he asked each one of them to testify that he had seen his genitals invade hers, "like the pen in the make-up container" (ka-l-mīl fī l-mukḥula) . When one of the three men, Ziyād ibn Abīhi , testified that he had not seen this clearly, the other three men were flogged, the charges against Mughīra and the woman dropped.

In addition, ʿUmar forbade the traditional legal institution of the so-called "pleasure marriage" (mutʿa) , which at that time was still practiced by many Muslims when they wanted to enter into short sexual relationships. The reason is said to have been various cases of women who became pregnant as a result of such mutʿa connections. ʿUmar then forbade Mutʿa marriage because he feared that it would lead to a moral decline (daġal) . The introduction of this prohibition also met with rejection from some of the Prophet's companionsː For example, Abdallāh ibn ʿAbbās narrates that when he spoke of ʿUmar's prohibition, he said the following words: “May God have mercy on ʿUmar! The Mutʿa was after all a permission of Godǃ He had mercy on the community ( umma ) of Muḥammad with her . If his [ʿUmars] prohibition [the Mutʿa] were not there, only a scoundrel (illā šaqīy) would need fornication! " 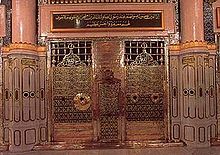 Tomb of ʿUmar, in the Prophet's Mosque in Medina.

ʿUmar was attacked with a dagger by former Iranian soldier Piruz Nahavandi in Medina on October 31, 644 while he was presiding over the morning prayers . Piruz Nahavandi stabbed ʿUmar in the stomach six times and then tried to escape. He is said to have wounded twelve other people in the process of escaping, six or nine of whom later died before committing suicide with his own blade. ʿUmar died of his injuries on November 3, 644. Piruz Nahavandi came from the Parthian family of the Karen , was a slave of the prophet comrade al-Mughīra b. Shuʿba and former soldier who had served under the Parthian commander of the Sassanid army Rostam Farrochzād . His motive for the attack is unclear. The assassin was buried in Kashan .

After ʿUmar's death, the Shūrā committee set up by him met and elected ʿUthmān ibn ʿAffān as his successor .

ʿUmar had a son named ʿAbdallāh , who was considered very pious and was brought into play as a possible compromise candidate between the camps of ʿAlī ibn Abī Tālib and Muʿāwiya I as a candidate for the caliphate after the Battle of Siffin . He is also one of the most important narrators of hadith .