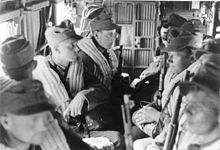 Members of the division during the air transport to Crete

The 5th Mountain Division was a large unit of the mountain troops of the Wehrmacht in World War II .

The division was set up on October 25, 1940 in the Salzburg - Zell am See area, formed from parts of the 1st Mountain Division (Mountain Infantry Regiment 100 and Mountain Artillery), the now motorized 10th Infantry Division and other units that had become vacant.

In May 1941, parts of the division took part in the airborne battle for Crete , in which the island was conquered. The III. Battalion was loaded onto cutters in the port of Chalkida on Evia , which were attacked by the British fleet on the way to Crete . The first motor sailor squadron to Maleme transported around 2300 men from mountain troops. Around 300 men were killed in the sea battle on May 21, 1941.

The second season to Heraklion was supposed to translate about 4,000 men. In the sea battle on May 22, 1941, she suffered only minor losses as Stukas rushed to help. An air / sea battle then developed in which the British fleet suffered heavy losses. The ships of the squadron had to turn back. The attempt to transfer combat troops to Crete by ship was abandoned. The mountaineers were brought to Crete by air.

The 2nd Battalion and parts of the regimental staff were then flown to Maleme on May 21, 1941 to conquer the airfield in order to clear the airfield. On May 22, 1941, the 1st Battalion followed to Maleme and was able to recapture the airfield from the Allies, mainly British and New Zealanders. On May 27th the soldiers stood in front of the city of Chania and Souda Bay. Later the remaining parts of the division were moved to Crete, the city of Ierapetra was taken and later the port of Chora Sfakion on the south coast. This was followed by occupation tasks and "pacification actions" such as the special enterprise League of Nations . In December 1941, the Mountain Infantry Regiment 100 left the island and moved to Salzburg and Tyrol.

After heavy defensive battles, the troops were relocated to northern Italy in November 1943 . In Italy she took part in the LI. Mountain Army Corps participated in the Battle of Monte Cassino , among other things . This was followed by trench warfare in Lombardy and then, as part of the Ligurian Army, security tasks in the western Alps , on Monte Viso and on the Little St. Bernhard . In May 1945 the remnants of the division surrendered under the LXXV. Army corps in the Turin area .

Members of various units in the division were involved in several war crimes in Italy between 1943 and 1945. Between late June and mid-July 1944, in the brands by members of the mountain infantry regiment 85 100 people, the majority civilians, in retaliation killed. 59 of them fell victim to the massacre in the municipality of Camerino on June 24, 1944 alone . Shortly before the end of the war, there were further excesses in the western Alps in Santhià and Grugliasco . In the two places, around 100 people were shot by members of the Mountain Infantry Regiment 100, among others. According to the Atlante degli Stragi Naziste e Fasciste in Italia project, financed by the German Federal Government and led by a historians' commission, between October 1943 and May 1945 there were around 300 people from members of the 5th Mountains Division killed.

Well-known members of the division

Divisions of the mountain troops of the Wehrmacht