Albumins ( Latin albus , white), like globulins, belong to the group of globular proteins . In the human organism, albumin primarily ensures that the colloid osmotic pressure is maintained and gives many otherwise water-insoluble substances water solubility by binding them to albumin. Albumins are also found in milk , eggs, and wheat . 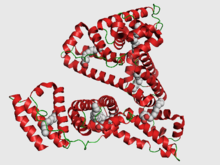 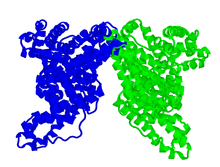 Albumins have a molecular mass of about 66,000  Da and consist of 584 to 590 amino acids . Due to a high proportion of cysteine , the albumins have a relatively high sulfur content . Albumins are water-soluble, their binding capacity for water is approx. 18 ml / g. The isoelectric point is at a pH of 4.6. Albumins are ampholytes , i.e. H. In contrast to other colloids or crystalloids , they can - like other proteins - bind both anions and cations reversibly . Albumin has a disaggregating effect on erythrocytes and platelets .

In the milk ( lactalbumin ) and in egg white ( ovalbumin ) albumin is included. Albumin homologs can be found in all chordates . Serum albumins are isolated from the blood serum by Cohn extraction .

Seeds of dicotyledonous plants (e.g. hemp seeds ) contain an average of 10 to 60 percent protein, a large part of which is known as 2S albumin . Albumin also occurs in the outer shell of the wheat grain in the form of leucosine , which distinguishes it from all other grains and is a possible cause of wheat allergy .

Albumin is used to treat Wilson's disease . If the liver is severely damaged as a result, it can be administered as an interim solution until a suitable donor organ is available. Albumin binds the copper, which is present in too large quantities, to itself.

In addition, albumin can also act as a carrier for the diagnosis of cancer can be used in tumor tissues. Solid tumors have an increased energy requirement for growth, which is covered, among other things, by the fact that the tumor absorbs large amounts of the blood protein albumin. A fluorescent substance (5-aminofluorescein) is coupled to the albumin, which is distributed in the body via the bloodstream and eventually accumulates in the tumor. The substance can be stimulated to glow with laser light , thereby making the fine extensions of the tumor visible. As a result, the boundaries between tumor and normal tissue are visible during the entire procedure. B. Brain surgeons make the operation easier.

Since the beginning of 2000, a working group at the German Cancer Research Center (DKFZ) has also been working on the development of albumin-bound therapeutics to target them in tumors and inflammations such as a. To smuggle rheumatism . The aim was to clarify the ways in which these albumin conjugates are taken up in the cell and how the therapeutic agent is released from the conjugate . The researchers at the DKFZ also worked on optimizing the connecting molecule between therapeutic agent and albumin in order to achieve an effective release at the place of action - and only there. The group determined the serum levels of the conjugates for the pharmacokinetic investigations in two clinical trials ( methotrexate- human serum- albumin (MTX-HSA) in phase I and aminofluorescein-HSA (AFL-HSA) in phase I / II). MTX-HSA has been tested in several studies up to clinical phase II. Despite multiple and often repeated use of the albumin conjugates, not a single allergic reaction such as the typical side effects of chemotherapy has been observed in the multicenter phase I / II studies in over 100 patients for MTX-HSA. In a preclinical study, aminopterin -HSA (AMPT-HSA) was shown to be the most effective conjugate with a tumor remission. However, due to restructuring of the pharmaceutical company developing the drug, further development was stopped.

In research, bovine albumin ( BSA , from bovine serum albumin ) is mainly used in immunology , among other things for the calibration of corresponding test procedures. In immunological detection methods such as B. the enzyme-linked immunosorbent assay or immunoprecipitations , BSA is often used to prevent unspecific binding of immunoglobulins to the plastic surface of the microtiter plates or agarose beads. These beads are used in immunoprecipitations and incubated with antibodies for this purpose.