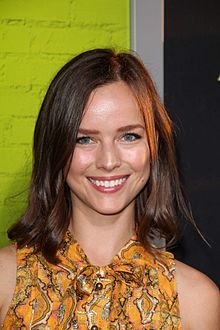 Allison Miller (born September 2, 1985 in Rome , Italy ) is an American actress and singer . She was best known for her role as Michelle Benjamin in Kings and Skye Tate in Terra Nova .

Allison Miller grew up in Kentucky , Pennsylvania and Florida , among others , and studied at the University of Florida and Rhodes College . In 2004 she reached the VH1 -Casting show the new version of the 1970 series The Partridge Family , the final of the role of Laurie . However, the role ultimately went to Emma Stone . In 2006 Miller moved to Hollywood . In the same year she played Lucy in Lucy's Piano and had several guest appearances in various television series .

In 2009, Miller landed the lead role as Michelle Benjamin in the short-lived NBC series Kings . She also starred in the 2009 film version of Blood: The Last Vampire and in the film 17 Again - Back to High School . In 2011, she worked as Skye Tate in the Fox - sci-fi series Terra Nova to see. From 2012 to 2013 she played the supporting role of Carrie , Ryan Kings ( Matthew Perry ) assistant in the comedy series Go On . In 2014 she starred with Zach Gilford in the horror film Devil’s Due, the couple Zach and Samantha McCall, who become part of a strange ritual during their honeymoon in the Dominican Republic.