He is best known for his accurate and atmospheric oil paintings of southern Norwegian landscapes . In Scandinavia he is often referred to as "The Coast Painter " ( kystens painter ) or "The painter of the Sørland region " ( Sørlandets painter ). He is also considered to be the first Norwegian landscape painter of realism , who consistently painted outdoors, directly in nature, and strongly oriented towards natural conditions and thus opposed the "artificial", nationally romantic current of his time. His work, especially the many marine motifs, are characterized by natural coloring , great attention to detail and an intense play of light. 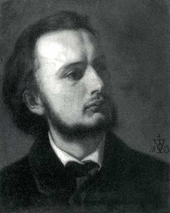 Amaldus Nielsen was born the son of the shipper and merchant Niels Nielsen and his wife Andrea Marie in Mandal , the southernmost city of Norway, where he also spent his childhood. From 1854 to 1856 he studied at the Royal Danish Academy of Art in Copenhagen . He then went - like other Norwegian painters of his generation - to Hans Gude at the Düsseldorf Art Academy from 1857 to 1859 ( see also: Düsseldorfer Malerschule ) and then ten years later he was Gude's student again at the Karlsruhe Art Academy . Together with Adolph Tidemand , Gude was the main representative of "Norwegian Romanticism". During his apprenticeship, Amaldus Nielsen mainly refined his technique - on the other hand, he was hardly associated with the motivic school of Romanticism.

He was one of the first to not stay in Germany after completing his training, but returned to Norway to feed on his art there. He made various trips, mainly through Norway, but also to Spain, where he studied light reflection in water in Cádiz for some time .

In 1868 he married Johanne Nicoline Augusta Vangensten. In 1869 the young family moved to the Majorstua district of Christiania, as Oslo was still called at the time. The house later called "Amaldhus", Majorstuveien 8 (Hegdehaugen), remained the residence of the Nielsen family until his death; later Thor Heyerdahl lived there .

In 1886 Nielsen's wife and three of their eleven children died in a diphtheria epidemic . At the age of 50, Amaldus Nielsen married his second wife, Ambor Laura Møller Tandberg, in 1888.

Later he largely gave up traveling and concentrated his work on developing earlier motifs and images of the surrounding area. He died in Oslo in 1932 at the age of 94.

As a landscape painter , Nielsen was primarily concerned with depicting the local Skagerrak coast , which he had known well since his childhood, but also drew and painted fjords and general marine and coastal motifs . His strengths were extremely wide-format landscapes, which despite isolated figures and boats appear lonely and exude an unsurpassed calm. Only a small part of Amaldus Nielsen's works, mainly created in later years, shows people or urban motifs as essential parts of the picture.

Since Nielsen's family donated most of the collection to the City of Oslo in 1933, a year after his death, the municipal Stenersen Museum has owned the most extensive collection of his works with around 300 paintings and 100 drawings from the years 1856 to 1932. The museum in Nielsen's birthplace Mandal can boast a further 130 works, over 70 of which are shown in the permanent exhibition. Individual works can also be seen in Kristiansand in Sørlandets Art Museum , in museums in Bergen and Trondheim and in the Norwegian National Gallery in Oslo.

Nielsen's best-known painting is Morgen ved Ny-Hellesund (the place belongs to Søgne ), completed in 1885 and shown in the Norwegian National Gallery. The motif, also known as Morgen i Ny-Hellesund , has been painted over and over again by Nielsen in different versions. Also among the better known works are Aften ved Fredrikstad from 1909 and Hodnestranden from 1914; the latter is in the Storebrand art collection in Oslo. 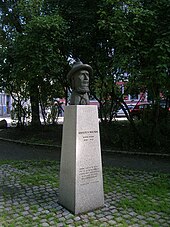