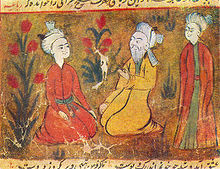 Some biographers suspect Patiala in the five rivers Punjab as his place of birth. His father, Amīr Sayf ud-Dīn Mahmūd, was a mercenary from Central Asia and belonged to the Latschin tribe, which in turn belonged to the Kara-Kitai . His mother was of Indian descent and belonged to the Rajput tribes of Uttar Pradesh . Legend has it that his family and the family of the famous Persian Sufi Jalāl ad-Dīn Rūmī left the area around Balkh almost at the same time, at the beginning of the 13th century, because of the Mongol invasion. While the Rumi family finally settled in Konya (then Rum region, now Turkey ), Amīr Sayf ud-Dīn settled near the city of Delhi .

After his father's death, his maternal grandfather was responsible for his upbringing and teaching. Since then they have lived in the suburbs of Delhi.

When he was eight years old his mother trained him in the meditation school of the scholar and Sufi saint of the Chishtiyya order Niẓām ad-Dīn Auliya (1238-1325). For Chusrau, Niẓām ad-Dīn was the spiritual mentor for life.

His 92 books, treatises and aphorisms in the languages Persian , Urdu and Hindi include Tāju 'l-Fatāh ("Crown of Victory "), Tuġluqnāma ("Book about (Sultan) Tughluq"), the love stories of " Shirīn and Chusrau " and “ Lailī and Majnūn ” as well as a treatise on “Pandsch Ganj” (“Five Treasures” - meaning the five works of Nezāmi ).

Amir Chusrau, who with a few exceptions wrote almost exclusively in Persian, was also an important musicologist. Prevailing in his time dhrupad style of Indian classical music , the instrument with the group of Vina counting long-necked loud was played, he is by inventing the khyal the -Stils and the introduction Sitar have added. Neither can be proven. The khyal style did not become popular until the 18th century; the origin of the sitār is linked to the appearance of sympathetic strings , which are only known from the 17th century. In addition, Chosrau is attributed to the introduction of the classical song forms tarāna (syllables sung at a fast pace), the naqsch-o gul ("pattern and flower") from Persian literature and the Sufi qawwālī chants. Some gharānās (music schools) trace a mythical lineage back to him.

Chusrau's music and poetry are close to the people and to nature. The compositions daryā- tāla (“river cycle”) and dunyā-tāla (“world and essence cycle”) are shaped by sensory impressions, tones and rhythms that occur in nature, in workshops and bazaars. From the beats generated by the instrument for loosening cotton, he got the idea of ​​developing a musical bow .

In 1325, after the death of his teacher Niẓām ad-Dīn Auliya, Chusrau died in Delhi. His grave is near him in the Nizamuddin district south of New Delhi , near his teacher's grave. India organizes music events on the occasion of the birth and death of Amir Chusrau, who is known as the "Sultan of Hearts". His grave is an important place of pilgrimage.