Neẓāmī-ye Ganǧawī at the reception of the Shah. Miniature. 1570. Museum of the History of Azerbaijan 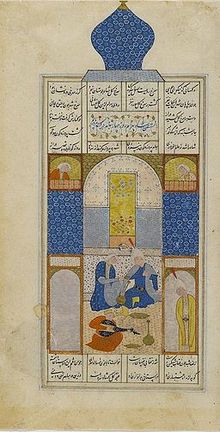 Bahram V visits the turquoise dome on Wednesday . Page from Haft Peykar from a manuscript by Nizami. Brooklyn Museum

Nezami's mother Ra'isa was a Kurd . His father Yusūf is believed to have come from Qom . Nezāmi was orphaned early and was raised by his maternal uncle, Chwadscha Umar. Nezami married three times.

He was a favorite of the ruling Seljuk princes . Little is known about his life, which he spent apart from one trip in his hometown Gəncə. In addition to literature, Nezāmi was also well versed in mathematics, astronomy, medicine, law, history, philosophy, music, and the arts. His students gave him the nickname Hakīm ( German  weiser, doctor ).

In addition, Nezāmi wrote a divan with odes and poems, which should contain 28,000 distiches .

Nezāmi's most important achievement is that all of his epics can be read on a philosophical level, except for Machzan ol-Asrār and the second part of the Book of Alexander, which are philosophical from the outset. On this level, Chosrau and Shirin deal with the essence of earthly love and the development of Chosrau into a faithful lover. Leila and Majnun describes the essence of heavenly love and the development of Majnun into a true mystic who no longer needs the beauty of the world. In the seven stories, the seven beauties reflect the development of a pleasure-seeking prince into a just king who ultimately has his tyrannical vizier (i.e. the ego) executed. According to Nezami's introduction, the book of Alexander shows the development of an Islamic prophet (who is considered to be Alexander) on the way to first physical and then moral world domination.

It was not until 1786, however, that 20 stories from Nezāmis Maẖzan ul-asrār ( Treasury of Secrets ) appeared in English by William Jones , who had been a judge at the Supreme Court in Calcutta since 1783 .

Translated directly from Persian into German, the first adaptations by Nezāmis Chosrau and Schirin appeared in Christoph Martin Wieland's magazine Neuer Teutscher Merkur , which their translator Joseph von Hammer-Purgstall , a graduate of the Vienna Oriental Academy , published as a book in Leipzig in 1809. Other (partial) editions of Nezāmi's works in European languages ​​that have been published as books are: Layli and Majnún: a poem (London 1836) by James Atkinson, Behram-Gur and the Russian Princess (a partial edition of the Seven Beauties ) in a bilingual Persian-German Edition by Franz von Erdmann ( Kazan 1843) and Alexander's move to the source of life in the land of darkness by Hermann Ethe, published in Munich in 1871.

With sculptures depicting Nezami, the poet is commemorated in many countries around the world, in Iran and Azerbaijan in many cities as well as in Moscow , Saint Petersburg , Kiev , Beijing , Tashkent , Marneuli , Chișinău , in the Volga Republic of Udmurtia and Rome , where a monument to the Persian-speaking poet was unveiled in Villa Borghese in 2012 .

The UNESCO declared the year 1991 to Nezami year.