Anti-Germans are a political movement in Germany that has emerged from various sections of the radical left . They oppose a specifically German nationalism , which was particularly strong in the course of German reunification . Other anti-German positions are solidarity with Israel and opposition to anti-Zionism , anti-Americanism , Islamism , certain (“ regressive ”) forms of anti-capitalism and anti-imperialism . These led and still lead to controversy within the left scene. 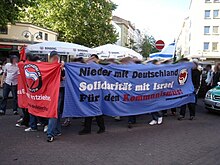 Anti-German in Frankfurt 2006 under the motto Nieder mit Deutschland

When analyzing the conceptual history of the word “anti-German”, Markus Mohr and Sebastian Haunss go back to “more or less explicitly anti-German motivated ideas and thoughts”. In 1844, Karl Marx, in his introduction to the criticism of Hegel's philosophy of law, declared the “War on German conditions! However! ”Required. Sebastian Haffner also developed anti-German ideas in his books Germany: Jekyll & Hyde and History of a German in the 1930s . Robert Vansittart assumed that all Germans were “ pathologically aggressive” and described them as “the troublemakers of civilization since Tacitus ”.

In the Neue Linke , the phrase "Anti-German Agitation" appears for the first time on the front page of the radical left underground sheet 883 from Berlin in the 27th edition of August 14, 1969. It “seems to have been used by the militant, anti-communist front town population against the students willing to protest”, so Mohr and Haunss.

Until 1989, the term anti-German was a rather diffuse foreign name for the internal German anti- patriotic movement as well as for the policy of the Allies towards Germany in World War II . The term was shaped today only later, when it was taken up again as a self-designation by a specific theoretical movement within the left.

Criticism from representatives of the radical left

Because of their positions, the anti-Germans are the subject of constant violent controversy. In addition, there are rifts and divisions within the current. Most of the criticism presented or cited below comes from representatives of the radical left. This is primarily due to the fact that the controversy over anti-German positions is predominantly an inner-left dispute. Some of the authors named were formative for the emergence of individual anti-German political concepts. Most of the statements come from the anthology published by Gerhard Hanloser You warn the anti-German of the German left (see literature ). In essence, a turn of the anti-Germans to the right or a partial “return to the bourgeois community of values” while abandoning left “essentials” is criticized.

For Gerhard Hanloser , the anti-German movement developed from a “failed self-criticism” by “often nationalist and populist leftists” - especially the K groups - into an “ affirmative turn ” that no longer subjects the “prevailing conditions” to “radical criticism” . He describes this attitude with an ironic motto: "Get isolated, be strong, individualistic and consumeristic , so that you too are not suited to being a German national ". Against this background, Bahamas initiator Bernhard Schmid claims a neoliberal shift to the right in the Bahamas .

Anti-Semitism researcher Ulrich Enderwitz sees in current anti-German policy approaches to "attempt in the wake of the global threat scenario social criticism by the obsessive Bornierung on fascism and anti-Semitism in an affirmation of capitalism and its global, also known as imperialist , remodel development".

Robert Kurz sees the basis of the partial affirmation of capitalist society above all in the condemnation of social movements in Germany by labeling these movements as “people's movements”, which is often used in anti-German circles as a synonym for ethnic movements . According to Kurz, anti-Germans also represent an unrealistic demand for “mediating hostility” to the relationship to capital.

Ilse Bindseil criticizes that the anti-Germans ultimately did not deal with the consequences of Auschwitz for German society and for their own biography. She accuses the anti-Germans of moral sectarianism and sees its cause in a "search for escape into innocence" by the post- 68ers , who had to recognize that the break with the generation does not protect them from the conditions of the "post-fascist society". Instead of doing justice to the complexity of topics such as Auschwitz, there is a tendency in this part of society to under-complex patterns of reflection and action that ultimately distract from the initial problem and no longer make it appear transparent. "The evil had to be found so that the crack in the biography could be filled."

Linking up with this, Gerhard Hanloser criticizes a "critical criticism", as Marx fought against Bruno Bauer as a merely theoretical, but not practical, criticism. This “critical criticism” is ultimately, according to Hanloser, only a “self-reflection of supposedly critical spirits”. Criticism thus degenerates into “ habitus ” and equates with “ denunciation ” and “ polemics ”, which is also reflected in the often unobjective style of anti-German publications.

In the 2006 report on the Protection of the Constitution , the anti-Germans are not seen as a single bloc due to the various ideological characteristics of the anti-German spectrum. What he has in common is the commitment to "unconditional solidarity with the politics of Israel and the Jewish people". This includes “advocating all measures that appear suitable to secure the existence of the State of Israel as the only shelter for Holocaust survivors. Since the US would be seen as the only 'honest' ally of Israel, parts of the anti-Germans turned against any form of anti-Americanism . "

The Office for the Protection of the Constitution 2008 states:

“The 'anti-German' trend has now passed the height of its influence on traditional left-wing extremism . Hardly any attention is paid to it in the scene. "

Anti-Germans are no longer mentioned in the following year's report.

According to an essay by the political scientist Rudolf van Hüllens published by the Federal Agency for Civic Education , the anti-Germans' obvious awareness of the racist-anti-Semitic character of National Socialism deserves recognition, because the suppression of anti-Semitism is one of the most serious ideological failures of anti-fascism Association of Islam with Islamist violence counter-educational and suitable to promote group-related enmity. This also applies to the suggestion that the Germans are particularly predestined for extremist violence against others due to historical, cultural, collective mental influences.