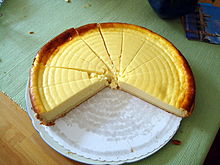 Cheesecake made from cottage cheese

The cheesecake or quark cake is a fine baked product , which is mainly baked from quark or another unsalted cream cheese , eggs , milk and sugar . Cheesecakes are made in open, covered or filled form. According to the guiding principles of the German Food Book, at least 150 g of cheese mass is used per 100 g of dough, and at least 30 percent quark (cream cheese) for the cheese mass.

Cheesecake (in Austria upper cup cream cake) is one of the composite cream cakes while Quarktorte (in Austria: pot pie ) to the baked cheese pies belongs.

For the cheesecake with a base, the base is first made from shortcrust pastry or yeast dough, then the quark filling is poured over it and the cake is baked.

A simplified variant of the cheesecake is the bottomless one. Here, the ingredients of the quark mass are simply mixed together with soft wheat semolina or corn semolina and baked.

The earliest known literary traditions of a cheesecake come from Athenaios , a colored writer in antiquity . Athenaios' works are among the most important sources for the ancient kitchen, as he also refers to many other writers, whose works have been lost. In his work Gastmahl der Schehrten ( ancient Greek Δειπνοσοφισταί Deipnosophistaí to deĩpnon 'meal' and sophistḗs 'scholar') he conveys the following traditional story: Xanthippe , the wife of the philosopher Socrates , had literally trampled on a cheesecake during one of her proverbial cheesecake. Alkibiades had this cheesecake sent to Socrates. Socrates reacted in a laconic way, now she too would no longer have a share in the cake.

Furthermore, Athenaios reports from Demetrios of skepticism , who in his commentary on the Trojans in the Iliad of Homer mentioned a village with the name "cheesecake" ( ancient Greek πλακοῦς plako ‚ s plakoũs 'plate'), located near Thebes .

Finally, Athenaios quotes Callimachos , who is considered the founder of scientific philology . Callimachos mentioned several writings with cheesecake recipes, including one by Aigimios , probably a Greek doctor, a script relating to cake making ( ancient Greek πλακουντοποιικόν σύγγραμμα plakountopoiikón sýngramma ). Aigimios probably lived like Hippocrates between the 5th and 4th centuries BC. Chr.

For the same period, the popularity of a cheesecake made from cottage cheese or sour cream is attested in ancient Greece. The Romans took over the preparation from the Greeks. Corresponding recipes have come down to us from the collection of Cato the Elder .

A recipe from the late Middle Ages comes from the French cookbook Le Viandier from the 14th century. The oldest modern (German) cheesecake recipe is in Anna Wecker's cookbook from 1598. In addition to quark, she lists eggs, sugar, butter and cinnamon as ingredients . The Complete Nürnbergische cookbook includes: 100 years later, several recipes for "Eyer-Käß-Dorten". In 1845 cheesecake was described as follows:

"... To brush over a soup plate of still soft white cheese is mixed with sweet cream and mixed with 1 cup of melted butter, sugar and cinnamon to taste, 2 eggs and 250 grams of well-washed currants - the dough is rolled out thinly on a plate, lets it rise, spreads the slightly warmed cheese mixture on it and bakes it quickly like butter cake. "

The spread of the cheesecake was still very different from region to region around 1900. At that time it was baked in many private households in the Rhineland , the Eifel , Saarland , Silesia and the Sudetenland , while it only played a subordinate role in north-west Germany , Schleswig-Holstein and in the far south-west.

There are numerous variants of the cheesecake (colloquially known as Kaskuchn in some areas of Central Germany ): by adding berries or stone fruit (for example raspberries , blueberries , blackberries , red and black currants , cherries , but also raisins ) to the cheese mixture before baking, a cheesecake can be made be modified. Other options include adding vanilla, vanillin, lemon oil, or maple syrup.

The teardrop cake variant is baked in the classic way, but removed from the oven about 10 minutes before the end of the baking time, coated with a layer of meringue and then baked to the end. As it cools, the moisture in the cheese mass penetrates the meringue and forms small pearls that look like tears.