Argyle Goolsby (born September 15, 1979 , real name Steve Matthews ) is an American horror punk musician and tattoo artist . As the singer and bassist of the band Blitzkid, he influenced and shaped the genre in the long term. According to his own information, he worked on 16 albums and more than 200 published songs in two decades and played more than 700 concerts in 29 countries by 2016. After Blitzkid and his involvement in various subsequent bands, he is now active with accompanying band as Argyle Goolsby and The Roving Midnight .

Originally from the small town of Bluefield in West Virginia , Steve Matthews formed the band Blitzkid in 1997 with his school friend Tracy Byrd. Initially intended as a pure fun project, influenced by melodic punk rock à la Bad Religion , the thematic and visual direction quickly changed towards horror. The early works were still strongly influenced by the horror punk of the Misfits, but the band soon developed its own style, which over the years had a formative effect on the genre and younger groups. As Byrd left the band for family reasons and Matthews found it increasingly difficult to keep the band alive with changing musicians, Blitzkid was buried in 2012. The last Blitzkid concert took place as part of the Return to the Living tour on November 10, 2012 in Düsseldorf.

Argyle Goolsby and The Roving Midnight (Live in Frostburg , 2018)

The first solo release was the EP A Dream Not Quite Remembered in 2012 . The Ox-Fanzine praises the "sometimes ballad-like, sometimes harsh mid-tempo songs that make you cry in bloodshot eyes" as a "good piece, a very good one". The follow-up EP Under The Witness Stars , which was released in 2013, also praised “great melodies, fast riffs and morbid romance”. After these solo releases, Argyle Goolsby joined the group Silent Horror in 2013 and sang the debut album of the same name for them. But at the beginning of 2015 he left the group again in an argument. In 2015 Goolsby released the album Saturnalia Of The Accursed , which was once again given a positive response by the Ox-Fanzine as "wonderful music". The US magazine Rue Morgue, the world's highest-circulation horror magazine, particularly emphasizes the singing, as well as the mixture of melody and aggression and that “dying rarely sounded so sweet”.

For Goolsby, lyrical and aesthetic influences arise primarily from cryptozoology , ghost stories and myths , also from his homeland, the Appalachians , classic horror B-movies , German Expressionism , the silent film era and the Gilded Age . But unlike many genre bands, it seems important to Goolsby not just to sing about horror topics from film and literature, but that his lyrics also have an “emotional backbone”. He also uses horror topics as metaphors to describe personal experiences. Horror is not just an artistic means and inspiration for him, but a lifestyle, as it contains many generally valid theses and truths: “On closer inspection, many of the monsters are not really the monsters. It is the human who is the monster. So a lot of horror films are social commentary in a way, so a really nice mix of metaphor and humanity and that's what I like the most. I like the human duality, you can be a monster and you can be a human. "

With his backing band The Roving Midnight, Argyle Goolsby performed for the first time in 2016 at the Summer Breeze Festival in Dinkelsbühl, as well as the Wave-Gotik-Treffen in Leipzig, which he had played with Blitzkid years before. In March 2018, Goolsby announced that he would join Michale Graves' band as bassist . The acoustic album Hollow Bodies was also released in 2018 .

Goolsby mainly uses the Aerodyne Bass from Fender and the M80 microphone from Telefunken , and since 2017 the Elvis 55 microphone from Erickson Labs. However, he also designed his own bass called “The Haxxan”, based on the horror classic Witches from 1922, as well as a microphone stand that creates the illusion of floating on the stage.

Steve Matthews was born in the small town of Bluefield , West Virginia , a mining town where he still lives and runs a tattoo shop. His brother had a fatal accident in a mine and his father only narrowly escaped this fate. These events served as an incentive for his musician career and a better life, as he did not want to end up as a miner or in the military, as is the case with too many in the structurally weak region. As an ordained pastor , he is also allowed to perform wedding ceremonies. With A Corpse with No Name he runs his own record company with sales, based in New Milford , Connecticut . On October 21, 2017, Mattews married longtime girlfriend Jordan Paoletta. They were married by Victoria Price, the daughter of horror legend Vincent Price , in the "Witch's Dungeon Classic Movie Museum" in Bristol .

Argyle Goolsby and The Roving Midnight (Live in Munich, 2015)

Argyle Goolsby and The Roving Midnight (Live at WGT, 2016) 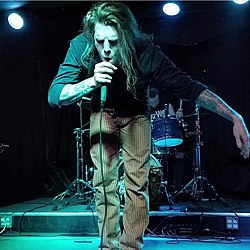