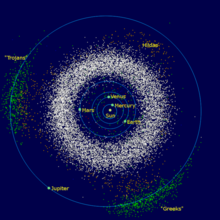 Object distribution in the asteroid belt 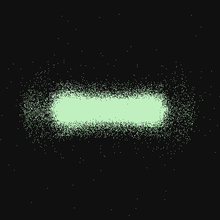 Distribution of the main belt asteroids normal to the ecliptic

The total area of ​​the individual orbits is given today as around 2.0 to 3.4  AU ; Already in the 1880s Johann Palisa calculated it with 2.2 to 3.6 AU. The total mass of all asteroids in the main belt is about 5 percent of the mass of the Earth's moon and corresponds to that of the largest Uranus moon, Titania, or a third of Pluto .

Based on the empirical formula known as the Titius-Bode series , which corresponded to the order of the planets known up to that point , the systematic search for a “missing” planet in this area according to the formula was started towards the end of the 18th century. With his discovery of the dwarf planet, later named (1) Ceres , on January 1, 1801, Giuseppe Piazzi believed to have found the planet. But in the years that followed, more and more similar discoveries were made.

1802 saw Heinrich Wilhelm Olbers with (2) Pallas , a second object that orbits the Sun between Mars and Jupiter. This was followed by the discoveries of (3) Juno  (1804), (4) Vesta  (1807) and 38 years later that of (5) Astraea  (1845). Although it was recognized that all objects between Mars and Jupiter were orders of magnitude smaller than the classical planets, at the time they were considered full-fledged planets. So it happened that the planet Neptune was counted as the thirteenth planet when it was discovered in 1846 .

With the discovery of the (6) Hebe in 1847, a flurry of new asteroid discoveries began. Therefore, at the suggestion of Alexander von Humboldt in 1851, the number of (large) planets was limited to eight and the new object class of asteroids (also known as planetoids or minor planets ) was created.

In the course of the redefinition of the term planet by the IAU on August 24, 2006, the largest, almost spherical asteroid (1) Ceres, which has a planet-like structure, was upgraded to the new object class of dwarf planets . Pluto , discovered in 1930, was downgraded from the ninth planet to a dwarf planet because of the presence of comparable objects in its orbit .

For a long time it was assumed that there must have been a small planet between Mars and Jupiter. He was called Phaeton . This then collided with a larger asteroid, which tore it into many pieces. This is not true, however, because the total mass of all asteroids is too low for a planet.

Today, however, most scientists follow a different hypothesis. According to this, the asteroid belt emerged from a presolar primeval nebula at the same time as the rest of the solar system . However, because of Jupiter's gravity, the molecules could not grow together to form a planet. 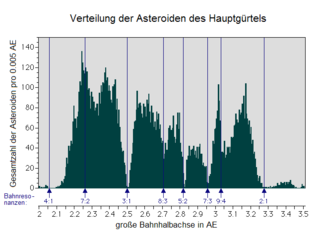 Distribution of the orbital half-axes of the main belt asteroids: arrows mark distances at which objects would be in an orbit resonance with Jupiter. The first digit indicates the number of asteroid orbits. 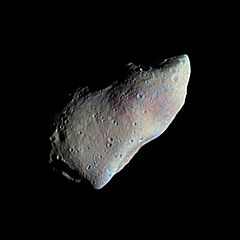 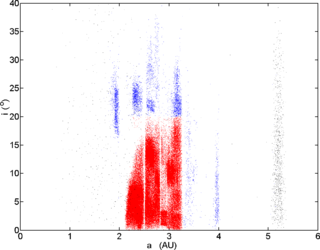 Orbit inclination over the length of the orbit half-axes: red: main belt asteroids, blue: other asteroids

The asteroids are objects the size of small, irregularly shaped chunks up to the dwarf planet in the main belt, Ceres , whose diameter is a good quarter of that of the moon and whose mass is approx. 1.3 percent of that of the moon, which comes close to the relation between moon and earth . Except for the brightest member of the belt, Vesta , they cannot be seen with the naked eye from Earth.

The composition of the asteroids is not the same throughout the main belt. In the inner area (between 2.0 and 2.5 AU), bright objects of the spectral classes  E ( albedo ~ 0.4) and S (albedo ~ 0.2) dominate, the V-class is also located there. These are objects rich in silicate that have been partially or completely melted in the course of their history. From a distance of about 2.5 AU the dark, carbon-containing asteroids of the spectral class C (albedo ~ 0.05) dominate. Their composition differs markedly from the asteroids in the inner area of ​​the main belt: They are likely to have emerged from a mixture of ice and rock that was only moderately heated. In the outer area of ​​the asteroid belt, objects of spectral classes D and P then increasingly appear. Although these are similar to the C-type, they have apparently hardly been heated significantly in their history, so that ice could still be present on their surface. With increasing distance from the sun, a development of objects with a complex geological past up to primitive (little changed) asteroids can be determined, which still correspond to the hypothetical planetesimals from the early days of the solar system.

The asteroids between Mars and Jupiter are not evenly distributed because the gravity of the planet Jupiter - it combines around 70 percent of the total mass of the planets in the solar system - causes orbital disruptions. With integer ratios of the orbital times of the asteroids and Jupiter, resonances occur that intensify the gravitational effect. In some of these areas stable asteroid orbits are not possible, so that there are gaps in the main belt. They were named Kirkwood gaps after the astronomer Daniel Kirkwood , who had already discovered these gaps in 1866 .

Noticeable are the 4: 1 resonance at 2.06 AU, which delimits the main belt inward, the Hestia gap (3: 1), the 5: 2 resonance zone and the Hecuba gap (2: 1), which forms the outer limit of the main belt at 3.3 AU. The vast majority of objects are between the orbits of Mars and Jupiter between the 4: 1 and 2: 1 resonance. In addition, they have relatively low inclinations. Outside this main belt there are isolated smaller groups of asteroids that accumulate at resonance areas that have a stabilizing effect on their orbits.

A space travel through the main belt usually means only a small risk, as the numerous space probes that have already crossed it have proven. In fact, complex course calculations are necessary to hit an asteroid, since the large number of more than 600,000 is distributed over an immense area.

Surroundings of the main belt (distances in AU)

The areas of the main belt asteroids are shown in red, those of the smaller asteroid groups in blue.

Asteroid groups in the main belt 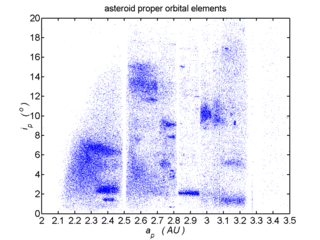 Orbit inclination over the length of the orbit half-axes of main belt asteroids: Asteroid families are noticeable as significant clusters.

Groups of asteroids that share common orbital elements, such as the length of the semiaxis , orbital inclination or eccentricity, and have a similar composition, are referred to as asteroid families. The families emerged from the collision of larger objects and consist of the resulting fragments. Many asteroids in the main belt can be divided into nine larger groups, each named after the representative discovered first.

About ten percent of known asteroids do not orbit between Mars and Jupiter.

Another asteroid belt, the volcanoes , is believed to be possible within Mercury's orbit, but has not yet been proven or refuted because of the proximity to the sun.