The Te Aupōuri tribe used to be called Ngāti Ruānui . When the tribe was in dispute with the Te Rarawa and was besieged, they set fire to all their belongings in the night and fled under cover of darkness and smoke. Since au stands for present or present at the moment and pōuri for smoke or ashes , the tribe Te Aupōuri has been called since that time and their country as well.

In the Māori mythology , the peninsula has another name and is called " Te Hiku-o-te-ika-a-Māui ", the tail of the fish of Māui . 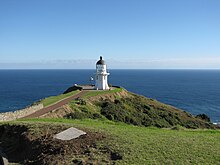 Cape Reinga with the lighthouse

Geographically, the peninsula begins by definition at its narrowest point. This would be the place between Paparore and Unahi at Rangaunu Harbor . In the extension to the west, the isthmus measures almost 7 km there. At its widest point in the north, the peninsula extends for almost 30 km and has a total length of 82 km in a north-westerly direction to Cape Reinga .

The peninsula is surrounded by the Tasman Sea in the west and the Pacific Ocean in the north and east. The west coast is dominated by a 96 km (60 miles) stretch of sandy beach, which is misleadingly called Ninety Mile Beach , from Shipwreck Bay in the south to Cape Maria van Diemen in the north . The northern coastline has two large beeches, Spirits Bay ( Piwhane ) and Tom Bowling Bay ( Takapaukura ), as well as two capes, Cape Reinga ( Te Regengawairua ) and North Cape ( Otou ). On the east coast there are two large bays, Great Exhibition Bay and Rangaunu Bay . In addition, the east coast has three natural harbors , Parengarenga Harbor in the north, Hauhora Harbor in the middle and Rangaunu Harbor in the south.

As the northernmost point of the so-called " Mainland " ( North and South Island taken together) the Surville Cliffs are referred to, which are located northwest of the North Cape .

Administratively, the peninsula is assigned to the Far North District of the Northland region . With an estimated 1600 inhabitants and an estimated total area of ​​the island of approx. 950 km², the island is extremely sparsely populated with 1.7 inhabitants per km².

The island is accessible by the New Zealand State Highway 1 , which leads to Cape Reinga . From it branch off isolated roads with gravel pavement to the east and west coast.

The inhabitants of the peninsula earn their income mainly from cattle and sheep breeding and from forest management, occasionally maize is also grown or income is earned in the area around Hauhora through fishing. In the few tourist places, such as the Te Paki Sand Dunes (sand dunes) in the north-west of the island or around Pukenuki at Hauhora Harbor , tourism also offers modest income opportunities.

By far the most attractive place from the point of view of tourists is Cape Reinga , with its gleaming white, over 10 meter high lighthouse, which stands on a 165  m high cliff. The place is also of cultural and historical importance. At Te Regengawairua , where two seas meet, according to the Māori mythology , the souls of the deceased are said to go their last way into the hereafter. So this place is sacred to the Māori . Accordingly, visitors are made aware of and attuned to the special features of the location.

The up to 110  m high sand dunes that westerly winds have built up towards the inland at Te Paki invite adventure seekers to go sand surfing.

The extremely long sandy beach on the west coast is popular with drivers with off-road vehicles or specially prepared tourist buses. Since this is only possible at low tide , it happens every now and then that drivers misjudge the tides and their vehicles then become victims of the high tide .