The law on foreigners or aliens law is part of the special regulatory law that essentially regulates the entry and residence of people who do not have the nationality of the country of residence. Regulations that are not linked to nationality, but only to other characteristics (such as residence ) are not included in the term. This applies, for example, to regulations of tax law or family law with foreign relevance that are only linked to one place of residence.

The subject of immigration law can be provisions on travel, settlement, gainful employment, integration , social security and tax law.

The term foreigner or alien law is because of its negative connotation used less and less today, and increasingly by right of residence or Migration Law replaced. The successor to the Aliens Act , which expired in Germany in 2004, is called the Residence Act . 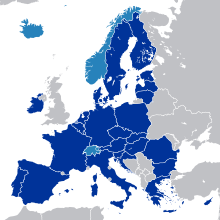 Common market made up of EU members and EFTA states

With the Vaduz Convention was established in 2001 between the EFTA -Staaten Iceland , Liechtenstein , Norway and Switzerland the freedom of movement , freedom of establishment , free immigration and free choice of residence agreed. The citizens of the Nordic countries and Liechtenstein are on an equal footing with those of EU member states as EFTA members on these points. There have been bilateral agreements with Switzerland since 1999, as Switzerland has not yet ratified EFTA accession.

Citizens within the common European market are therefore allowed to enter and stay in any member state even if they are not employed. The right of residence and immigration of Union citizens is therefore hardly accessible to autonomous legal regulation and control by the individual member states.

The legal principles relating to the entry and residence of foreigners in the Federal Republic of Germany, since January 1, 2005 at the Residence Act (AufenthG) and EEA Nationals in the Freedom of Movement Act / EU included (Freedom of Movement / EU). Both laws were enacted as Articles 1 and 2 of the Act on Controlling and Limiting Immigration and Regulating the Residence and Integration of Union Citizens and Foreigners ( Immigration Act ) , which also contains further legislative changes.

The Residence Act primarily regulates the residence of third-country nationals .

Objects of regulation are

In order to make the Residence Act more concrete, the legislature empowers the Federal Ministry of the Interior as executive authority in Section 99 of the Residence Act to issue a Residence Ordinance (AufenthV). This regulates u. a.

In addition, Section 42 of the Residence Act empowers the Federal Ministry of Economics and Labor to issue the Employment Ordinance (BeschV), which regulates issues relating to work permits for foreigners.

The Asylum Act regulates the recognition procedure for asylum seekers . While the material asylum law follows from Article 16a of the Basic Law , refugee status is determined according to § § 3  ff. AsylG and subsidiary protection according to § 4 AsylG. According to the AsylG, the refugee's residence status is also determined during the recognition process ( Section 55 AsylG). The issuance of a residence title for a person recognized as having no appeal or a refugee is regulated in Section 25, Paragraphs 1 and 2 of the Residence Act.

The AZR Act contains regulations for keeping the central register of foreigners.

In order to implement the law on foreigners, the Federal Ministry of the Interior issued:

The German tax law generally contains no distinctions on the nationality , which is the reason that in the forms for tax returns nationality need not be specified.

In Austria , aliens law is im

In the Swiss Confederation , the law on foreigners is primarily regulated in the Federal Act on Foreigners (AuG).