The Baltic Cable is a high-voltage direct current transmission line for coupling the German with the Swedish power grid , which was put into operation in December 1994.

The Baltic Cable uses 450  kV the highest operating voltage of all systems for transmitting power in Germany and was up to the commissioning of the NorNed in 2008 with a transmission distance of 250 km, the longest in Europe in use high-voltage cable . The transmission line is implemented as a high-voltage direct current transmission (HVDC) with a maximum transmission capacity of 600 MW. 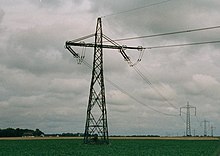 Overhead line of the HVDC "Baltic Cable" in Sweden. Both conductors are permanently connected in parallel. The second pole is designed as an underground cable which leads from the Kruseberg converter station to an electrode (anode) sunk in the Baltic Sea.

With a submarine cable, the principle of monopolar direct current transmission is that only one pole is laid as an insulated cable in the ground or on the seabed.

The second pole is designed as an electrode in the water. The sea water or the upper layers of the earth serve as the return line on the sea route. In order to achieve a low earthing resistance , the earth electrodes are designed as large-area structures, the so-called electrodes . The electrical conductivity of seawater plays because of the large cross section of the resistance not matter. With the Baltic Cable , the electrodes of the earth electrodes consist of a ring made of bare copper with a radius of 1000 m.

Environmental aspects of the electrodes submerged in the water

Kruseberg converter station on the Swedish side of the Baltic Cable

In seawater, electricity is transported through ionic conduction . The electrolysis triggered by the maximum electrical direct current of 1340 A at the electrodes leads to chemical decomposition of the seawater or the salts dissolved in it. The chloride dissolved in the water is oxidized to chlorine at the anode , and the oxygen dissolved in the seawater is reduced to hydroxide ions at the cathode . 41 kg of chlorine at the anode and 47.8 kg of sodium hydroxide at the cathode are released into the Baltic Sea every day . At the same time, 6.6 g / min of dissolved oxygen is withdrawn from the seawater at the cathode. In the case of the Baltic Cable, the electrode in Sweden is the anode and the German side is the cathode. The direction of the current is always the same, regardless of whether power is transferred from Sweden to Germany or vice versa. In order to change the direction of the transmitted power, the voltage of the high-voltage cable is reversed, not the direction of the current. It is therefore possible to choose different materials for the two electrodes (anode made of titanium, cathode made of copper) in order to avoid corrosion in particular of the anode.

Alternatively, it can also be expanded to a bipolar system. After carrying out such an extension, if both poles were operated with the same strength of current, no current would flow through the grounding electrodes and thus no electrolysis of the seawater would occur. In fact, some monopolar HVDC systems have already been upgraded to bipolar systems (example: Kontiskan ). The overhead line section in Sweden has been prepared for this by installing two conductor cables, and at least on the area of ​​the Arrie converter station in Sweden there is enough space for the erection of a second converter. Whether this expansion will take place in the foreseeable future, which could allow double the transmission capacity, is questionable because of the suboptimal network connection in Lübeck.

On the German side, the Baltic Cable emerges from the earth in Lübeck-Herrenwyk (arrow)

Thyristor tower in a converter station of the Baltic Cable

The "Baltic Cable" emanating from the converter station, which consists of the 450 kV high-voltage cable and the electrode cable leading to the electrode in the Baltic Sea, crosses the Trave located directly next to this area in a channel 6 meters below the floor of the Trave then as a submarine cable laid in the Trave to follow it to its mouth.

After crossing the Priwall peninsula , the Baltic Cable follows the coast of Mecklenburg-Western Pomerania , then slowly to the northeast, east of Rostock , towards Sweden. The electrode cable leading to the electrode runs up to about 5 km northwest of Kalkhorst-Warnkenhagen , Mecklenburg-Western Pomerania 54 ° 2 ′ 0.6 ″  N , 11 ° 3 ′ 11.5 ″  E parallel to the high voltage cable (distance approx. 1 meter, in the canal laid under the Trave directly next to the high-voltage cable). 54.0335 11.053194444444

The 23-kilometer line from the Kruseberg converter station to the anode on the bottom of the Baltic Sea off the Swedish coast consists of two parallel-connected copper cables laid in the ground with a cross-section of 630 mm² each, insulated with XLPE . 40 titanium nets serve as the anode, each of which has an area of ​​20 m² and which are covered with plastic pipes and stones to protect against mechanical damage. Because of its construction as a monopolar cable, the Baltic Cable leads to significantly higher magnetic fields in its surroundings than DC cables with integrated or short-spaced return conductors.

Since this overhead line can cause radio interference, an active harmonic filter was installed in the converter station in Kruseberg . Because there is no overhead line section of the Baltic Cable on the German side, there is no such facility in Lübeck-Herrenwyk.

The HVDC Baltic Cable could not originally be operated with the maximum possible transmission capacity of 600 MW, as the 380 kV three-phase current line from Lübeck-Herrenwyk ends in the Lübeck-Siems substation and the connection to the German 380 kV network is still via lines the 220 kV and in some cases even the 110 kV level, which greatly reduces the maximum transferable power and also increases the transfer losses.

From the originally planned two 380 kV lines to Lübeck (from the Krümmel nuclear power plant to Lübeck-Siems and from the Lübeck-Herrenwyk converter station to the Schwerin 380 kV substation ), the construction of the 380 kV line between the Krümmel nuclear power plant and the According to E.ON AG , the Lübeck-Siems substation has been deleted. The construction of a 380 kV connection from Lübeck-Herrenwyk to Schwerin is also not making progress due to high spatial resistances .

Since the expansion of wind power in the network area of ​​the Schleswig-Holstein Netz increased from five megawatts in 1989 to 6,450 MW in 2019, the need for additional transmission capacity within Schleswig-Holstein and towards the south has increased even further. With project number 42, an extra high voltage line between the Segeberg district , Lübeck, Siems and Göhl was laid down in the Federal Requirements Plan Act. Because of its course along the Schleswig-Holstein Baltic Sea coast , the transmission system operator Tennet TSO also refers to the line as the East Coast Line. It has a length of km 132, consists of three sections and is in parts as underground cables - pilot project to run. Total commissioning is planned for 2027 Template: future / in 5 years.

In the night from April 16, 2016 to April 17, 2016, the electrode cable on the Priwall peninsula was defective. This led to the development of hydrogen at the damaged area because the defective electrode cable acted like a cathode at this point, where this gas was created. As a result of the heat generated by the defect, it ignited explosively when its concentration in the air was sufficient and generated a 3 meter high jet flame. Because there was no device to monitor the electrode cable, no alarm was triggered by the operators. The called fire brigade could not extinguish this at first, but the flame went out when the cable was switched off because no more hydrogen was supplied.