Barefoot through Hiroshima ( Japanese は だ し の ゲ ン Hadashi no Gen , eng. Barefoot Gen ) is a manga by the Japanese artist Keiji Nakazawa . With strong autobiographical traits, he tells the survival of six-year-old Gen Nakaoka after the atomic bomb was dropped on Hiroshima . The approximately 2500-page comic series has been translated into several languages, filmed twice as an anime and has received international awards.

The story begins a few days before the atomic bomb was dropped and describes the life of the Nakaoka family in militaristic Japan during the last days of the Second World War .

The family of the six-year-old Gen lives in Hiroshima and consists of several siblings, of whom the brother Akira is sent to the apparently safe land, as well as the pregnant mother and father, who, as a pacifist, publicly criticizes the imperial regime and its attitude to war. Although it is becoming apparent that Japan can hardly stand up to the English and American "devils" (according to government propaganda ), he is viewed as a traitor because with this attitude he also questions the divinity of Tennō . The family is harassed, excluded from society and subjected to severe reprisals. His only friend turns out to be his neighbor Pak, who as a Korean is also shunned by society. Everywhere the Nakaokas are witnessing excessive fanaticism , militarism and patriotism . Finally, the eldest brother Koji enlisted in the military to save the family's reputation. 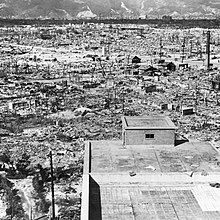 Hiroshima after the atomic bomb was dropped

The experiments with the atomic bomb and the launch of the Enola Gay from Tinian Island are also shown. The atomic bomb was dropped on Hiroshima on August 6, 1945 at 8:15 a.m. Gen's father, sister Eiko and younger brother Shinji are buried in the burning rubble of their home and perish in the flames in front of Gen. Gen and his heavily pregnant mother manage to escape at the last moment, whereupon they give birth to a daughter named Tomoko on the side of the road. Together the three survivors try to leave the rubble field.

Hiroshima is in ruins, mass extinction sets in, people are dying in unbearable pain. Gen's mother can no longer breastfeed her daughter because of the lack of food. In his search for food and drink, Gen encounters many people who suffer from radiation sickness , have to face the deaths of their relatives and refuse him any help as they are struggling to survive.

When Gen returns to his family with Reis (his hair has already fallen out), he is stolen by the boy Ryuta, who belongs to a gang of orphans who steal their food by stealing their food. Gen follows Ryuta to the gang's hideout because he looks like Shinji. Ryuta struggles and his gang beats up Gen. On the way to see his mother, Gen meets his neighbor Pak again. Contrary to Gen's expectations, his neighbor yells at him and explains his anger at the Japanese. Pak was able to find his seriously injured father after the bomb was dropped. However, he died because no doctor wanted to take care of a Korean. Gen helps him bury his father and they both go their separate ways. Gen's mother leaves directions to her new home in Hiroshima in case Koji returns from the war. Gen and his mother find shelter with Kiyo, a childhood friend of their mother, in the fishing village of Eba. However, when Kiyo's mother-in-law unjustifiably accuses them of stealing rice, they have to leave the house.

Gen is hired to look after the radiation victim, Seiji, who the family does not want to take care of. Since Gen needs the money, he does not let himself be shaken off by his illness and harsh and dismissive manner and slowly builds up a relationship with the young man who used to be a painter and is viewed by his own family as a monster. Seiji tries in vain to paint again but cannot bear being treated as a leper and eventually dies.

Gen meets Ryuta again and persuades his mother to take him in. His mother also sees her late Shinji in him again. Despite the scarce food supplies, she takes in Ryuta to make up for Shinji's death. The Nakaokas move back to Hiroshima with Ryuta. There they will find previously planted wheat sprouts in front of their burned down house, which give them hope for a better life. Gen and Ryuta pick up Akira from the country. Koji also returns from the war.

After the capitulation of Japan , fear of the Americans grew among the population. Douglas MacArthur is given the command of the Japanese during the occupation . The family finally loses their shelter and is housed in a cave. Gen and Ryuta meet the seedy Ohba, who is now the leader of Ryuta's old gang of thieves, and join him. However, he denied them their share of the booty from a theft from an American grocery store. Ryuta then shoots Ohba and his brother Mitsugi, but is saved from the police by a yakuza gang. To spare the Nakaoka family shame, he breaks off contact with them, but leaves them money for a fresh start. From this, Gen and his family can afford a small, poorly built house and food.

One month later, everyday life and school starts again in Hiroshima, but Gen remains an outsider. His sister Tomoko is kidnapped by a man who wants to give his dying daughter and toddler strength again before she dies. The girl is then passed around the entire neighborhood and gives people confidence in the future. Gen persuades the men to give him back his sister, but she is terminally ill. He meets Pak again, who has become a wealthy businessman by selling rice on the black market. He gives Gen the money he needs so that he can afford the expensive drugs for Tomoko. However, the baby dies before Gen can give her the medication. Their death takes away all courage to live. Tomokos from Rennyo's "Letter from the White Ashes" is received at the funeral. Only when his hair started growing again two years later did he realize that his life was going on and that he had an obligation to accept it.

In Japan, the first publication began in 1973 in individual chapters in the manga magazine Shōnen Jump of the Shueisha publishing house, but the series was discontinued after a year and a half. The rest of the story then appeared in the lesser-known magazines Shimin ( Citizens ), Bunka Hyoron ( Culture Critic ), and Kyoiku Hyoron ( Educational Critic ). In 1975 the series was published in ten anthologies, of which a total of about six million copies were sold. A new edition of the manga was later published in eight volumes.

Starting in 1976, Project Gen, a Tokyo-based community of volunteers from Japan and the United States, began translating the work into English. On this basis, two volumes of an English-language edition were realized from 1978 under the title Barefoot Gen , which was the first manga published in the USA. Later US new releases appeared in revised versions under the titles Gen of Hiroshima (from 1980) and I Saw It - The Atomic Bombing of Hiroshima (from 1982).

Barfuß durch Hiroshima was first published in German in 1982 by Rowohlt Verlag , making it the first German manga. The planned series was discontinued after the first volume due to a lack of sales. On the 60th anniversary of the atomic bombing in 2005, Carlsen Comics began again with a publication of the work in 2004, with a foreword by Art Spiegelman . Of the ten volumes of the original, the four volumes were published:

Furthermore, the series appeared u. a. also in France as Gen d'Hiroshima (first 1982), in Sweden as Gen, pojken från Hiroshima (1985, first manga in Swedish), in Finland as Hiroshiman poika , in the Netherlands as Gen Barrevoets in Hiroshima , in Poland as Hiroszima 1945 Bosonogi gene , in Brazil as gene, the Barefoot and in English as Barefoot Gen . The French and English editions contain all ten volumes of the original.

The anime studio Madhouse made a movie about the manga ( Hadashi no Gen ) in 1983 . This was followed in 1986 by a second part ( Hadashi no Gen 2 ), which takes place three years after the bombing. A German version of both films was released on DVD by Anime Virtual in 2006 .

In 2006, the WDR produced a one-hour radio play adaptation of the comic, which was implemented by the artist duo half past themselves . Half past it's own fault also adapted their radio play in the form of a stage comic for the theater . The world premiere took place on November 15, 2006 in Düsseldorf .

The story is loosely based on the personal experiences of the author Keiji Nakazawa , whose father, brother and sister were killed when the atom bomb was dropped on Hiroshima. As a hibakusha (atomic bomb victim), Nakazawa has since suffered from leukemia; his mother died in 1966 from the effects of radiation. Her death was what sparked Nakazawa, who had previously drawn science fiction and baseball comics, to begin working on Barefoot around Hiroshima .

The story is to be understood as a warning against war and against nuclear weapons. This becomes clear, for example, in the final scene of the first volume, in which Gen's mother holds up her daughter, who was born shortly after the explosion, and calls out, “When you grow up, you must never allow something like this to happen again.” The comic style in particular makes it possible to make clear the child's perspective on the terrible events. A leitmotif that appears again and again is the sun, which is both a symbol for Japan and an expression of life force, but also an image and harbinger of the atomic bomb explosion.

Barefoot through Hiroshima founded the genre of pāsonaru komikku in Japan , comics based on a personal story. The significance of the manga and the way it links the comic medium with an autobiographical coming to terms with the past is compared with Art Spiegelman's Mouse - The Story of a Survivor who deals with the Holocaust , “the other central tragedy of the twentieth century” . Art Spiegelmann, who wrote the foreword to the German edition, was enthusiastic about the relentless directness of Barefoot through Hiroshima , which had a direct influence on the work on his own comic Mouse . "Nakazawa and Spiegelman are brothers in spirit and in action," said Thomas Schneider in the Stuttgarter Zeitung.

Barefoot through Hiroshima was awarded the Tournesol Prize at the Angoulême International Comics Festival in 2004, which has been awarded since 1997 for works with outstanding social commitment.

In 2006 Barefoot received the Max and Moritz Prize from the Erlangen Comic Salon in the “Best Manga” category through Hiroshima .

The manga is consistently praised and is a comic book classic. The complexity of the characters and the accuracy of the portrayal of the social situation at the time of Japanese nationalism and the incitement to war were emphasized in the taz . In the December 2004 issue of AnimaniA , they spoke of merciless drawings that would show the cruelty of the war, and said: "The [...] Manga history lesson also fits into school and should be part of absolutely required reading ..." Frederik L. Describing Barefoot through Hiroshima as one of the most moving comics of all time, Schodt said the manga was a "dramatic record of the suffering of survivors [of the atomic bombs] and a revelation of militarism in pre-war Japan."