Under Berggeschrey or Berggeschrey refers to a rapidly spinning Customer richer Erzfunde that led a mining Revieres for rapid development as the beginning of the silver ore - mining in the Erzgebirge . This is in some ways comparable to the gold rush in North America . 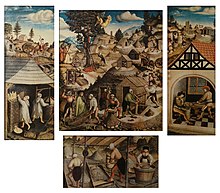 Depiction of historical mining on the Annaberg mountain altar from 1522

Even in the course of the first settlement there were small tin , iron and copper finds .

But when rich silver finds in the Freiberg area became known in 1168 , they triggered the first mountain scream . Miners, traders, charcoal burners and vagabonds in this inhospitable area quickly came to the news of the silver wealth. The Margrave of Meissen , owner of the mining right ( Bergregal ), had granted the settlers pouring into the country "Wherever you want to look for it, do it right ." In order to settle the miners, most of whom came from the Harz region , they were exempted from feudal taxes to landlords and were able to devote themselves entirely to their work. However , they had to pay a direct tax in the form of the mountain tithe to the sovereign.

The search for ore extended over the centuries to the ridges of the Ore Mountains . Three hundred years after the First Berggeschrey, abundant silver ore deposits were discovered in 1470 in Schneeberg and in 1491/92 on Schreckenberg in what is now Annaberg-Buchholz . The Second Mountain Scream, better known as the Great Mountain Scream , was based on this news . Lively mining activity and the associated influx of people from other regions extended to the entire Ore Mountains. Already at the end of the 15th century it was much more densely populated than before. During this time the mining towns of Jáchymov (Sankt Joachimsthal), Annaberg , Buchholz , Schneeberg and Marienberg were established . 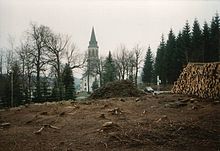 Almost eight hundred years after the first mountain screeching, in the post-war years from 1946 onwards, with the uranium mining of SDAG Wismut , another gold rush atmosphere broke out in the Ore Mountains. As a result of the rapid and ruthless upswing, the number of inhabitants in some places, such as Johanngeorgenstadt , rose again sharply. Particularly in the early days of the bismuth mining, there was considerable pollution of the environment, historic town centers and infrastructure (e.g. the health resort and facilities of the formerly internationally well-known Schlema radium bath ) were destroyed. The bismuth miners were exposed to bad working conditions, radiation and toxins to a high degree, which had serious health consequences.

In addition to silver and uranium , tin , iron , copper , arsenic , lead , cobalt , nickel , bismuth , tungsten and zinc were mined in the Ore Mountains .

With the political change after 1990 the mining operations of the SDAG Wismut were completely stopped. The largest employer and most important economic factor in the region suddenly disappeared. The lime works in the Lengefeld district of the same name, Kalkwerk, was the last mine in Saxony and the German side of the Ore Mountains to work with shaft extraction . The entire mining region of the Erzgebirge with its aboveground mining products, show mines , technical monuments, educational mining trails and the traditions of the locals are testimonies to these three formative epochs of ore mining.

The term Berggeschrey has been used since around 2010 for plans to return ore to the Ore Mountains. The development of raw material prices makes some mines profitable again - possibly in time to build on the experiences of the bearers of the mining tradition.