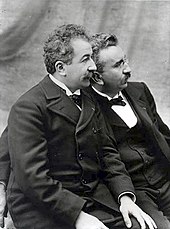 The Lumière brothers were Auguste Marie Louis Nicolas Lumière (born  October 19, 1862 in Besançon ; †  April 10, 1954 in Lyon ) and Louis Jean Lumière (born  October 5, 1864 in Besançon; †  June 6, 1948 in Bandol , Var department ) . They were photo industrialists. You are the originators of the Domitor project, later Cinématographe , also known as Kinétoscope de projection based on Edison's peep box .

Her father Claude Antoine Lumière (1840–1911) learned the profession of script painter from the painter Auguste Constantin. In 1860 he went in Besancon independently . Soon he was attracted to the spread of photography. In 1870 the family moved to Lyon. Lumière was successful as a portrait photographer . He tried making gelatin drying plates, but left the problem to his son Louis. After five months there was a more sensitive plate than the one available up to then. Gradually, photographers demanded the same until in 1882 Louis and Auguste started making photographic plates together , the business that Father Lumière had in mind. In 1894 the Lumière brothers produced around 15 million photographic plates and employed 300 workers. In that year the contact with the American kinetoscope also took place, as Charles Moisson wrote, chief mechanic at the factory in Lyon-Monplaisir. 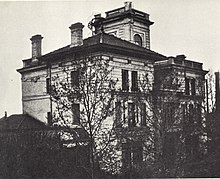 Auguste and Louis Lumière's twin villa in Lyon, with a shared staircase

The Lumière brothers performed a version of the film “ Workers Leave the Lumière Works ” in front of a closed audience in the Société d'encouragement pour l'industrie nationale on March 22, 1895 with the Cinématographe . The next screening took place on June 10, 1895 at the “Congrès des Sociétés photographiques de France” with eight short films , including “Am Börseplatz in Lyon”, “Blacksmiths at work”, “Bébé catching fish”, “A conflagration” and “ Baby's Breakfast ".

On December 28, 1895, France's first public film screening in front of a paying audience took place in the Grand Café on the Boulevard des Capucines in Paris , in which employees of the Lumière brothers showed ten self-made short films with the cinématographe , including “ Workers Leaving the Lumière Works ” and “ The watered gardener ”. The first performance outside Paris took place on March 1, 1896 in the Galeries Royales Saint-Hubert in Brussels . After that, regular screenings with eight to ten films and a total duration of around 20 minutes took place. The short film L'enfant au ballon was also made in 1896. In 1905 the Lumière brothers sold their patent of February 1895 to Charles Pathé , who then continued the industrialization of the cinema.

In 1907 the Lumière brothers presented the autochrome plates for color photography, which had been developed since 1903 and which were provided with orange-red, green and purple-colored starch granules made from potatoes and a bromide-silver gelatine emulsion; the starch granules act as a grid-like filter. The principle was originally developed by Henri Joseph Joly in 1893 and was based on an additive grid method. The production of Autochrome plates was set in 1932, as improved photo emulsions entered the market ( three-layer color films from Agfa , Kodak Kodachrome u 1914. A.).

A collection of 1,405 works produced or attributed to Louis and Auguste Lumière was declared World Document Heritage in 2005 . Lumière Peak in Antarctica bears her name in their honor.

The Lumière Institute is located in Lyon in the Monplaisir district (8th arrondissement). It includes two cinemas, a documentation center and educational rooms as well as a museum in the Villa Lumière, the former home of the brothers.

The chronophotographs by Ottomar Anschütz, projected in rapid succession, are considered to be the forerunners of the cinema .

Jean-Aimé LeRoy claimed to have carried out a film projection with a self-made device in February 1894 in front of 20 to 25 invited guests.

In 1895 there were numerous screenings of moving images, for example by Thomas Armat and Charles Francis Jenkins in Washington, DC , Woodville Latham in New York and Robert William Paul in London .

The Skladanowsky brothers , who had already been able to present a film with their bioscope in the Berlin Variété Wintergarten a month earlier on November 1, 1895 , also took part in the Lumière screening.