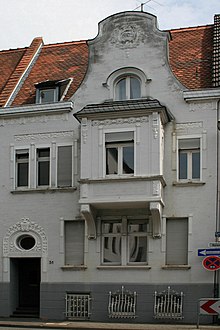 The residential building Bylandtstraße 31 is in the Rheydt district in Mönchengladbach ( North Rhine-Westphalia ).

In the House Nr. 31 is a typical inner-city Single detached , which in form and shape with the same neighboring building erected no. 29 corresponds. It is built as a two-storey plastered building with an asymmetrical facade structure . Accentuation of the right section of the facade by means of a box-shaped, console-supported bay window and an elongated neck gable.

Access to the house through the right-hand, sloping entrance niche with crowning ox-eye . On the right flanking three barred cellar windows , the left one is larger and rectangular. The windows, which are basically the same as narrow vertical rectangles on both floors, are grouped together on the ground floor to form a group of four, with the two middle ones being connected by a common sill . The four or five windows on the upper floor are linked in the left axis to form a three-window window using a common sill; on the right of the bay window , which is open on three sides , there is a single window. The gable field opens a smaller arched window in the middle . The surface of the high, steep gable roof breaks through an arched window on the left in the entrance axis. The sparingly used stucco ornamentation is limited to the finely modeled crown decoration of the upper floor windows - including the bay window and the entrance niche in the form of floral Art Nouveau . The upper gable field is adorned with a correspondingly stylized cartridge .

Architectural monuments in Bylandtstrasse in Mönchengladbach