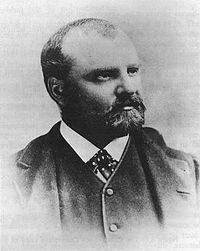 King's father, James Rivers King, had a company for foreign trade, especially with China , but died in 1848 and his mother, Florence Little King, got into financial difficulties afterwards when the family business of her late husband, which continued to support each other, was dissolved. King first attended school in Hartford , Connecticut and then went to Yale University (Sheffield Scientific School) with the degree in 1860. There he studied natural sciences, especially physics, chemistry and also geology with James Dwight Dana , but his real interest in geology first awoke after graduation, nourished by his enthusiasm for stays in the wilderness and in the mountains. He joined pre-Raphaelite artistic circles in New York City and lived there with James Terry Gardiner .

In 1863 he went to California to work at the forerunner California Geological Survey as an unpaid assistant under Josiah D. Whitney and William H. Brewer . His experiences as a mountaineer later flowed into his book Mountaineering in the Sierra Nevada (1872) and he climbed several mountain peaks in the Sierra Nevada such as Mount Tyndall , Mount Shasta and Mount Whitney . He worked there with his friend Gardiner, who had joined him, and was part of the expedition in September 1864 that explored the boundaries of the Yosemite Valley , which Abraham Lincoln made the first national park in the United States that same year . On the way back at sea via Nicaragua, he fell ill with malaria . In 1865 he explored the Mojave Desert and Arizona with Gardiner on behalf of the US military and in 1866 again Yosemite.

He then returned to his social life and was friends with statesmen such as Henry Adams and John Hay . His private employment in the mining industry was insufficient to finance his lavish lifestyle, and he was heavily in debt.

He became known in 1872 when he exposed a hoax involving diamond mines in Arizona. The scammers had offered the mines to investors in San Francisco and New York (including well-known names such as Tiffany's and Baron Rothschild ) and led their experts to a remote mountain that they had inoculated with industrial diamonds . King and his assistant Samuel F. Emmons independently controlled this and publicized the hoax. He was a member of the National Academy of Sciences , the American Philosophical Society, and the American Academy of Arts and Sciences . The King Peak in Antarctica is named after him .

King led a double life in his final years. He was married in New York since 1888 to the former slave and African-American nurse Ada Copeland, with whom he had five children. Until shortly before his death, he pretended to be a black railroad clerk by the name of James Todd, despite his appearance, as multiracial marriages were met with strong social reservations in New York at the time.