Dedê (also Dede , Dedé or Dédé ; bourgeois Leonardo de Deus Santos ; born April 18, 1978 in Belo Horizonte ) is a Brazilian soccer coach and former soccer player . The left full-back was under contract with Borussia Dortmund from 1998 to 2011 and played more than 300 Bundesliga games for BVB. He has an international match for the Brazilian national football team .

Leonardo de Deus Santos grew up as the second of six brothers, of whom Lucas Dedê ( Cacá ) and Leandro later also became football professionals , in a favela in the metropolis of Belo Horizonte . As a child he was friends with Lincoln . Dedê started playing football at the age of four. At the age of eight, he took part in a trial training session at Atlético Mineiro together with Soãres and his brother Leandro . At the same time he was already earning a living from his family with various jobs. He attended school for seven years, but had to repeat three times. As a youngster, Dedê was active in up to four clubs at the same time and thus had countless training units per week and sometimes even several games on just one day.

Dedê began his professional career in 1996 at Atlético Mineiro . In 1997 he was awarded a Bola de Prata , a silver ball, by the football magazine Placar as the best player in his position in the Brazilian league and was appointed to the Brazilian Olympic team.

In July 1998, at the age of 20, he moved to Borussia Dortmund, where he made his debut on August 14, 1998, when he was started by coach Michael Skibbe in the game against VfB Stuttgart . minute for Vladimir But was changed again. Dede's brother Leandro was also under contract with Borussia Dortmund from 2002 to 2004. 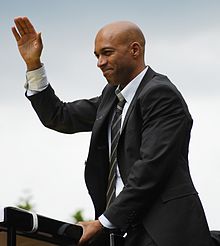 With Dortmund Dedê was German champion in 2002 and 2011 and reached the final of the 2001/02 UEFA Cup . He traditionally had the number 17 on his back, which he also used to sign autographs.

He was the longest-serving player at Borussia Dortmund. Dedê has had German citizenship since October 23, 2007.

With Borussia Dortmund he was in the DFB Cup final in Berlin on April 19, 2008 , which the team lost 2-1 after extra time against Bayern Munich .

In March 2011, Borussia Dortmund announced that the contract with Dedê, which expired at the end of June 2011, would not be extended. He moved to Eskişehirspor in Turkey for the 2011/12 season and worked again after eleven years with Michael Skibbe , his first coach during his time in Dortmund. Dedê played his first competitive game for the club on September 10, 2011 against Beşiktaş Istanbul . He celebrated his first goal in the 4-0 win in Sivas (September 2011). He scored the 1-0 in the 18th minute of play with a directly converted free kick. With this club he ended his career as a player in the summer of 2014. The next season Dedê was hired as an assistant coach at Eskişehirspor.

On September 5, 2015, Dedê held his farewell game in the Westfalenstadion , the stadium of his long-term club Borussia Dortmund, with which he thanked the fans from Dortmund for their darling. The game took place in front of a record crowd of 81,359 spectators, making it the best-attended farewell game of a former professional footballer in Europe. There was a so-called "Dede World Selection" with mostly foreign, mostly Brazilian professionals like Julio Cesar, Tinga, Ewerthon, Evanilson, Lincoln, Paulo Sergio, Marcio Amoroso, Ailton as well as Jan Koller, Alex Frei and Miki Stevic. Opponent was the "Dede national team"; the team consisted of predominantly German former teammates or opponents such as Dedês. B. Thomas Häßler, Roman Weidenfeller, Kevin Großkreutz, Jens Lehmann, Otto Addo, Knut Reinhardt, Torsten Frings, Lars Ricken, Heiko Herrlich, Kevin Kuranyi or Sergej Barbarez. Dedê himself played a full 90 minutes, one half per team. The game ended 14:11 for the "Dede World Selection". Part of the proceeds will go to the BVB foundation "leuchte auf".

For the Brazilian national soccer team Dedê played once in 2004 in a 4-1 win against Hungary .

Dedê is called "the German" or "the Brazilian Prussian" by his Brazilian compatriots because he has internalized the German way of life and mentality. This is reflected in a quote in an interview with the Ruhr-Nachrichten : “Later I would like to live in Brazil again and have many children. But they should do an apprenticeship or study in Germany so that they learn that a 9 o'clock appointment takes place at 9 o'clock and not at 11 o'clock or 12 o'clock. "