The Protestant village church Zöllmersdorf is a stone church in Zöllmersdorf , a district of the city of Luckau in the Dahme-Spreewald district in the state of Brandenburg . The church belongs to the parish of Lower Lausitz the Evangelical Church Berlin-Brandenburg-Silesian Oberlausitz .

The Zöllmersdorfer Dorfstraße spans the historic village green in an elliptical shape. The Beke also flows through there. The building stands on this lawn on a slightly elevated surface that is enclosed by a wall .

The sacred building was built around 1300 and was a branch church of Langengrassau for centuries . In 1911 the parish had the building completely changed. A choir was added to the east, the tower dome was added to the west and the windows were enlarged. A comprehensive restoration took place in 1996.

The original structure was essentially made of field stones . The later added, polygonal choir was made of brick , which was then plastered . The base of the building and the cornice at the transition to the roof were highlighted in color, as was its building edges, which are designed as pilaster strips . In the north-east and south-east choir wall there is a round arched window, the fins of which are emphasized.

This is followed by the nave to the west . Its east wall is closed and the gable is plastered. The cleaning work also extends over the long sides of the ship. On its north side are two large arched windows with accentuated bezels. On the south side there are two windows arranged in pairs in the east, between a round arched gate and another window to the west. The ship carries a gable roof , which with beaver tail is covered.

The west tower sits on top of the hall church. Access is possible from the west via a round arched gate. Reddish brick walls can be seen below the gable; in the middle is an ogival opening. The tower is boarded up and has a small, high-rectangular sound arcade on the north and south sides . On it sits an eight-fold kinked tower helmet , which ends with a tower ball and weather vane . 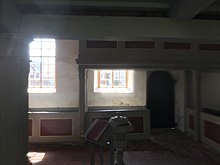 View into the nave

The pulpit altar was erected in 1911 for redesign. The predella from the end of the 17th century shows the Lord's Supper . The goblet-shaped fifth with a wooden lid is a foundation from 1892. The horseshoe gallery dates from the 18th century. A flat ceiling spans the interior; the western part is separated as a vestibule. The organ was probably built by Eduard Glietsch from Luckau around 1860. In 2006 the instrument was restored.

In front of the west tower, two memorial stones commemorate those who died in the world wars. To the west of the building there is a war cemetery in the cemetery.