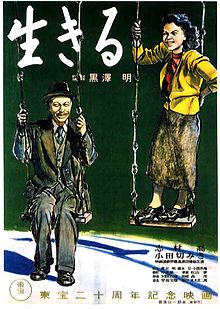 Kanji Watanabe, department head of a city complaints center, is about to retire when he learns that he has stomach cancer and has only a few months to live. He realizes that he has wasted all these years as a powerless cog in the bureaucracy and that his son does not care about him and instead only cares about his inheritance. Watanabe is suddenly faced with the ruins of his life. He decides to enjoy life as best he can, throws himself into the nightlife, drinks, plays, dances and yet he cannot shake off his loneliness. He begins a brief friendship with Toyo, a former employee, but she doesn't really know what to do with the old man. When the two of them met in a café where a birthday party was taking place, Watanabe remembers some women from a poor part of the city who asked for a playground for their children. He decides to make this playground a reality and fights against the opposition of the bureaucracy to give his life some meaning after all.

At the end of the film, Watanabe is dead; the politicians argue about who should be given the honors for building the playground. The bureaucracy hasn't changed and continues to ignore people's needs. But for a couple of kids playing, Watanabe changed the world.

"A drama designed with restraint, representational precision and visual urgency, laid out as a humane, salutary and unsettling meditation."

“The German adaptation of a great, socially critical fateful film from Japan [...]. We recommend."

The film was invited to the competition of the Berlinale 1954 .

Ikiru was re-produced for television and aired on TV Asahi on September 9, 2007 . The main role was played by Matsumoto Kōshirō IX, who belongs to an old family of kabuki actors. Since the plot takes place in 2007, some roles and parts of the plot have been changed.