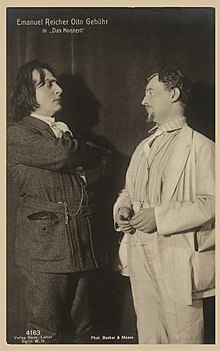 Emanuel Reicher and Otto Fee in The Concert (around 1920)

As a high school student, Emanuel Reicher's acting talent emerged. He made his debut at the Kraków Theater under a pseudonym . With great ambition and diligence, he strived to achieve an exemplary expression. Soon he became one of the best and most expressive actors in Germany.

Soon after his debut in Munich in 1873 , he received a contract at the Residenz Theater in Berlin, where he earned a reputation as one of the best German Shakespeare interpreters. This was followed by an engagement at the Lessing Theater directed by Otto Brahm . In addition, Reicher took over the management of the theater school there. As a teacher of a new generation of German actors, he rejected any kind of virtuosity and supported and encouraged young talents. In 1889 he was one of the founders of the theater association Freie Bühne . In 1899, together with Friedrich Moest , he founded the Reichers Academy for Dramatic Art in Berlin . In 1901 Moest became the manager and owner of this facility together with his wife Else Schoch-Moest .

As a student of Otto Brahm, Reicher stood for an innovative naturalistic way of playing. The theater critic Hermann Bahr described him as the foster father of German acting.

In 1908 Reicher played, together with his daughter Hedwig, in Goethe's Iphigenie at the Esperanto World Congress in Dresden.

He later went to the USA, where he was surprised by the outbreak of the First World War . As director of the New York Theater Guild, he subsequently propagated the new style of German theater. In 1923 he returned to Germany and gave guest roles at the Residenz Theater and the Renaissance Theater in Berlin.

Reicher was married to the chamber singer Hedwig Kindermann and to her father von Frank (1875-1965). The two got divorced, but wanted to step in front of the altar again. That prevented Kindermann's death. Instead, he married the actress Lina Reicher, born in 1883. Harp. From the marriage came Hedwiga (1884–1971) and Ernst (1885–1936) as well as Elly Reicher (born Berlin 1893); all the children became actors too.

His grave is in the south-west cemetery Stahnsdorf .

If you want to help, the instructions explain how to do it.
BW