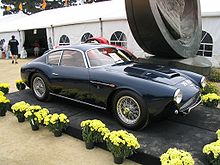 Unique piece based on the Ferrari Testarossa: the Zagato F93

Ercole Spada (born July 26, 1937 in Busto Arsizio ) is an Italian automobile designer who has designed numerous Italian and German vehicles since 1960. In the 1960s Spada was chief designer at Zagato , later he designed bodies for mass-produced vehicles for BMW and Fiat . He currently works for the design studio Spadaconcept. Ercole Spada's creations are often viewed as timelessly elegant. Regardless of his productivity and his influence on other vehicle designers, Spada is still one of the most unknown designers in Europe.

From 1956 to 1960 Spada trained as a designer at the Istituto Technico Industriale Feltrinelli in Milan. In 1960 he took up a job for Zagato that would last until 1969. After just a few months, Spada became the chief designer of the traditional Milanese bodywork manufacturer. During this time Spada designed numerous sports cars for Zagato that are now considered classics. Spada is widely regarded as Zagato's most important designer, responsible for the company's most creative and successful times. They include the Alfa Romeo Junior Zagato , the Alfa Romeo 2600 SZ and the Lancia Fulvia Sport . In addition, Spada designed one-offs or mini series vehicles for Aston Martin and Bristol .

In 1969 Spada left Zagato to become chief designer of the Ford concern Carrozzeria Ghia . Here he designed, among other things, the Ford GT70 , a sports car only produced in Great Britain in small numbers.

In 1983 Spada returned to Italy. He became head of design at the I.DE.A Institute in Turin , which designed numerous mass-produced vehicles for the Fiat group in the 1980s. Spada's designs here primarily referred to the newly developed platform of the Fiat Tipo , numerous offshoots of which were also developed for the Alfa Romeo and Lancia brands. Spada's last creation for the Fiat group was the Alfa Romeo 166 .

In 1992, Spada began working for Zagato again. During this time, a number of individual pieces or small series vehicles were created for Ferrari and Aston Martin.

In 2006, Spada founded the Turin-based company Spadaconcept with his son Paolo and Domiziano Boschi, which specializes in automotive and industrial design. Ercole Spada is currently the company's President.