The Lancia Flaminia is a luxury class automobile from the manufacturer Lancia, which was produced from spring 1957 to early 1970. It succeeded the Lancia Aurelia and, like this, bore the name of a Roman road, the Via Flaminia . It is based on the Lancia Florida I / II studies .

1955 began a new era for the Lancia brand. The Lancia family could no longer hold the company founded by Vincenzo Lancia in 1906 and had to sell the shares in the family company after 49 years. Cavaliere Carlo Pesenti, a building contractor and cement manufacturer, took over the company in autumn 1955.

After the Second World War, Gianni Lancia, the son of Vincenzo Lancia, who died in 1937, did not invest enough in new production facilities. The production costs of the current Appia and Aurelia models were high, plus the enormous sums for the Grand Prix activities of the Squadra Corse Lancia. Lancia's commercial vehicle division had also made losses.

During this time, Lancia's in-house designer Pininfarina presented a large sedan, planned as the successor to the Lancia Aurelia .

This design was based on a study by Pinin Farina called " Florida I " on the Aurelia chassis. A large four-door sedan with doors that open in opposite directions, like the Aurelia. The shield-shaped grille of the Aurelia had given way to a long flat one and the entire body was made lower and slimmer. Without window frames and B-pillar, the car looked like an elegant four-door coupé, similar to today's Mercedes CLS. The design was trend-setting for the time and had a lasting influence on the styling of the 1960s. Today the vehicle can occasionally be seen at classic car events such as the Concorso d´Eleganza Villa d´Este on Lake Como.

Lancia's management was convinced of the shape of the Florida and had a series sedan developed on this basis. At the 1956 Turin Motor Show , Lancia showed the prototype of the new car. It was a comfortable sedan with a 72 kW (98 hp) V6 engine with a gearbox at the rear of the axle. Technically, the new automobile had many similarities to its predecessor, the Lancia Aurelia; but the body shape was new.

A year later, at the Geneva Motor Show in March 1957, Lancia presented the series-ready Flaminia. The shape of this limousine ( called Berlina ) was modern and simple. The car shaped vehicle design in the coming years like no other: Not only the Pininfarina designs for Peugeot (404) and the British Motor Corporation were based on the so-called trapezoidal shape of the Flaminia, but also the American (Pontiac), Japanese (Prince ) and German manufacturers (DKW, Borgward, Sachsenring).

The engine output of the new model was initially 75 kW (102 hp). As with the Aurelia, the engine was a V6 - a design that was only available from Lancia at the time, whereas today it is almost the norm on six-cylinder engines.

The limousine was again well thought out and designed with extensive detailed solutions. For example - but only in the first series - a rear window wiper system with 2 wiper blades inside and outside ensured a clear view. A compressed air unit was installed especially to open the third side window. The horn could be switched with a little lever: Either a decent sonorous fanfare sounded or a very discreet signal so as not to frighten people in the city. Later models could also be equipped with a heated rear window and electric windows.

The Flaminia had a fully synchronized gearbox that sat in a common housing with the differential ( transaxle ), a DeDion rear axle and (from the beginning of 1961) disc brakes on all four wheels.

The second series appeared in the fall of 1963.

Because of its ingenious, but also elaborate design, the Flaminia was an expensive car that was higher in price than comparable vehicles from Mercedes-Benz or Jaguar.

This and the high taxes for cars with more than 2000 cc on the Italian home market prevented large numbers. From the spring of 1957 to the beginning of 1970, only 4,000 sedans were built.

As with the Lancia Appia , three concepts were chosen, implemented by Pininfarina, Touring and Zagato. Pininfarina built the elegant, four-seater coupe for long journeys, Touring realized the sporty two-seater for medium-sized companies and Zagato was responsible for the super sports car with racing ambitions.

At the 1960 Paris Motor Show, the Lancia Loraymo, a design study by industrial designer Raymond Loewy, was presented based on the Flaminia chassis.

At the Turin Motor Show in 1958, Lancia showed the two-door, four-seater coupe from Pininfarina . The car was a direct development of the Florida II, which was built on a Lancia chassis . Like the Florida I, the Florida II was designed by Battista Farina. The design was one of his personal favorites and was driven by himself until his death in 1966.

The coupe was very similar to the sedan. For the time it was technically and creatively trend-setting. The basic concept of the sedan, consisting of a DeDion double articulated axle, the subframe for the front axle and engine with double wishbone axle, the six-cylinder V-engine and the gearbox arranged at the rear with the clutch were adopted. The wheelbase was shortened from 2.87 m to 2.75 m and the engine output was increased to 87 kW (119 hp). Due to the lower weight, 1500 kg, and the shortened wheelbase, the performance was better than that of the heavier sedan.

In a test by the magazine das Auto, Motor und Sport in 1960, the car accelerated from 0 to 100 km / h in 16.4 seconds and reached a top speed of 168 km / h. With a base price of DM 26,850, the Lancia was four times as expensive as a Karmann Ghia and was therefore one of the luxury cars. The price could be increased by a heater (300 DM), disc brakes on all four wheels (550 DM) and leather upholstery (1,150 DM). In return, the customer received a vehicle, such as Auto Motor und Sport, which was exceptional in its driving behavior, workmanship and elegance. The driving behavior is described as very handy, well-sprung and precise. The workmanship was very high quality with small gaps, high-quality materials and elaborate details. Examples of this are wheel nuts made of brass, trunk lids, bonnets and tanks made of aluminum, as well as aluminum panels for the sills and the B-pillar. The design was rated as particularly elegant both inside and outside.

The second series followed in the autumn of 1963 (Type 826), which bore the model designation "Coupé 3B 2.8". The main difference to the first is the increase in displacement to 2775 cm³. The car now had 103 kW (140 PS) and thus reached a top speed of 181 km / h. In addition, the car was simplified or changed in some details, front bumper, seats, taillights, in order to be able to produce the vehicle more cost-effectively. Compared to the 2.5-liter car, the 2.8-liter was offered much cheaper.

In 1966 Lancia asked for DM 21,550, but the number of units remained at a low level. Therefore, the Flaminia Coupé manufactured by Pininfarina is now quite underrepresented in the German classic car scene. The scene is much more pronounced in England, the Netherlands and Switzerland.

Anyone looking for an interesting classic from the 1960s with top-class technology and good workmanship will find the right car in the Flaminia. The Flaminia cannot be compared with modern Lancias of the Fiat era. The processing is just as complex as with contemporary Maserati, Ferrari or Jaguar. In some cases, the same components are used, such as brakes, headlights, door handles, electrics, windscreen washers or ashtrays.

There are few good cars of the Pininfarina Coupé on the market. Compared to old Alfa Romeos, parts are hard to come by and at high prices. However, replicas of the essential wear parts are now available from Italian specialists.

Close up from the front

The second variant, offered between spring 1959 and mid-1967, was built by Carrozzeria Touring , recognizable by the designation GT (= Gran Turismo ). The shape is based on that of the Maserati 3500 GT. In principle, this car, like the PF Coupé, has the technical components of the sedan. The Superleggera design typical of Touring , a body with an aluminum-clad tubular steel frame, reduced the weight by 200 kg. The curb weight of the Touring Coupé was only 1337 kg. Due to the wheelbase shortened to 2520 mm and the reduced frontal area, performance and road holding improved.

In 1960, Auto, Motor und Sport was enthusiastic about the car and counted the car among the best series-produced sports cars. Compared to the Pininfarina Coupé, the car has harder suspension, louder and faster. In the test, the 2.5-liter version accelerated from 0 to 100 km / h in 12.8 s. The top speed was 180 km / h.

The Touring Coupé was also not a cheap car at at least DM 29,850. Leather upholstery cost another DM 510 extra. In Italy the Lancia was considered the Ferrari of the middle class. A Ferrari 275 was a lot more expensive than the Touring at around DM 49,000.

The car was continuously developed. As with the Pininfarina Coupé, the Touring benefited from the further development of the engines. The first series (type 824) was only available with one carburetor and 87 kW (119 PS), followed by the 3 C version with three double carburettors and here already 103 kW (140 PS). The second series (type 826) was equipped with the 2.8-liter engine with 110 kW (150 hp) from autumn 1963.

Only a few examples of the Flaminia Touring were built. Nevertheless, the car is more common at classic car events than the Pininfarina Coupé. The spare parts situation is similar to that of the Pininfarina Coupé. Really good cars are rare here, too, as the aluminum body can only be repaired with great expertise.

The Flaminia GTL was a 2 + 2-seater coupé variant of the GT with a wheelbase extended to 2600 mm.

The Lancia Flaminia Sport appeared at the Turin Motor Show in 1958. The car was designed by Carrozzeria Zagato and built from spring 1959. Unlike GT versions of Touring with their stretched lines, the sport versions looked stocky. In fact, they were lighter and more aerodynamic and had even better acceleration values ​​and top speed. All Flaminia Sport and Flaminia Supersport models had the Zagato-typical Double Bubble roof construction (two bulges above the heads of the occupants), which provided good headroom and body rigidity. In the autumn of 1963, the output was also increased to 110 kW (150 hp) in sports . The production of the Zagato Sport ended in mid-1967. Zagato transferred some elements of the design to other models, including the Bristol 406 Zagato and the 407 GTZ Zagato .

The two factory prototypes of the Flaminia SZ were built on a tubular frame chassis so that the weight was only 980 kg.

On the basis of the Flaminia GT, Superleggera Touring also manufactured an elegant open two-seater (convertibile) between spring 1959 and mid-1967. 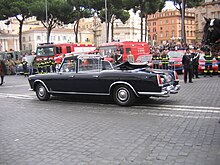 The Flaminia presidenziale at the Festa della Repubblica Italiana on June 2, 2007

The presidenziale was commissioned by the state in a small series of 5 pieces, four of which are still in government service and are used by the President of the Italian Republic on official occasions.