The Lancia Thesis is a four-door notchback sedan from the Italian car manufacturer Lancia , which was produced from spring 2002 to summer 2009. The German Federal Motor Transport Authority assigns the vehicle to the luxury class .

The thesis was presented in autumn 2001 based on the Lancia Dialogos study from 1998 as the successor to the Lancia Kappa . Production began in March 2002. However, the new registrations of the Thesis in Germany remained behind those of the Kappa over the entire duration. In Germany, the Lancia Thesis is largely unknown.

When sales began in August 2002, the Thesis was available with three petrol engines (2.0 Turbosoft, 2.4 20V and 3.0 V6 24V) and a diesel (2.4 10V JTD). In May 2003, the three-liter V6 petrol engine was replaced by a 3.2-liter unit with 230 hp. At the same time, another diesel engine appeared that had four-valve technology and here (despite the same displacement of 2.4 liters) made 175 hp. In April 2006 this was increased in performance and now had 185 hp and a diesel particulate filter. The six-speed manual transmission was also omitted, which meant that the Thesis could only be ordered with the Comfortronic five-speed automatic transmission .

In September 2007, the range of engines was severely restricted, as only the 2.4 Multijet diesel (185 hp) was available.

The Thesis could still be ordered as a special model Ultima Edizione until June 15, 2009 , after which the production of the large sedan ended.

It was not until November 2011 that a successor with Chrysler technology was brought onto the market with the new Lancia Thema .

The base price for the only Multijet diesel with a displacement of 2.4 liters available in Germany from model year 2008 onwards was € 48,900 for the Emblema equipment. The simpler executive equipment could be ordered in other European markets (e.g. in Austria) . 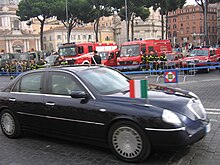 Thesis Protecta as a state limousine 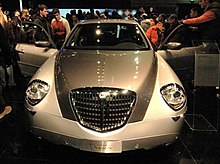 The two special models Centenario Elegante and Centenario Sportiva - presented as anniversary editions for the 100th anniversary of the Lancia brand - were only offered with diesel engines. The following special equipment was recently available:

Armored versions (B4 and B6) were also available: Thesis Protecta

The Lancia Thesis Jubileo was made for the Pope . The car is extended in the area of ​​the rear side doors and has a large sliding roof. 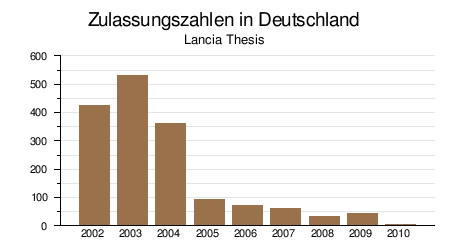 Extended part of the study

Maggiora developed a coupé version of the Thesis on behalf of Lancia, which was presented at the Bologna Motor Show in 2002 as the Granturismo Lancia study and was intended as a successor to the Lancia Kappa Coupé . There was no series production. However, some important stylistic features can be found in the later Lancia Delta.

At the 2004 Geneva Motor Show , the Turin-based coachbuilder Stole presented a version that was 60 centimeters longer than the S85 . The 85 stands for Stola's 85th anniversary in 2004. The 5.488 m long vehicle is painted in two colors in black and dark red and has beige leather, wooden inlays and electrically adjustable rear seats in the interior. The equipment includes a minibar with fridge and a multimedia system with GPS navigation, internet access, fax machine and DVD system. The study, which could also be ordered for around 150,000 euros on request, is powered by the 3.2-l V6 engine from the series sedan, which has an output of 169 kW (230 hp), the 2030 kg car in 9.2 Seconds from 0 to 100 km / h and reached a top speed of 230 km / h.